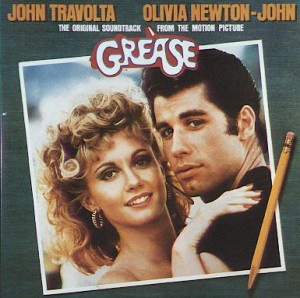 I recently purchased “GREASE” on a trip to Target (of course).
The other night Andrew and I started watching it and were a bit shocked.  Both us us “grew up” on this movie and I’m sure many of you did the same. It’s a great movie, a classic if you will.  But wow, some of the phrases (and implied nudges) are down right vulgar!  EEeekk!
Andrew said the other night, “…. Um, did you hear what he just said? I either don’t remember that or I didn’t know what it meant…” And other moments where we just laughed hysterically, shaking our heads at what had just been said.
We are currently watching part of it (we fell asleep the other night when it was on)…the part with Vince Fontaine!
Some of my favorite quotes from this part of the movie:
“I’m the best dancer at St. Bernadette’s”.. Said just like Cha Cha in her sassy tone.  Who hasn’t wanted to just say this and be a little sassy about it?  {hopefully not just me…}  But I guess you would have had to have gone to St. Bernadette’s for it to mean anything.  Ok, never mind.
“I feel like a defective typewriter”..Rizzo.  Ok, I’m pretty sure we’ve all had days like this.
“What did she give him?” “A lock of hair…from her chest.”…Marty.  Oh, there are no words with a mean girls statement like that.  It’s just funny.
“Tell me about it, stud.”…Sandy.  Who doesn’t love this part of the movie.  When “You’re the One That I Want” takes over the high school carnival.
It’s such a great movie (never mind the under tones).  I hope you have fond memories of this musical and if it’s been a while since you last saw it, rent it on NetFlix or grab it at your next trip to Target (I think it was only $5!).