This kid.  I’m tell you, he knows when something is about to go down.

Yesterday, Andrew and I were both at work.  I was in a five hour long management meeting (sounds awful, right?!) and there is this rule about not being able to look at your cell phone.  I was communicating with my Supervisor to get some numbers from him so that I had them for what I was going to be talking about during the meeting.  While I was waiting for his response my beloved calls.  I ignored his call and shot a quick text, “mgt mtg”.

This is what I get back:

“I’m going to get him and call doc”

That’s enough to send a mom into a frenzy.  Even more so when she’s planned for a get-together at her home that evening and come hell or high water, it was going to happen!!

I said a prayer and hoped that our son was ok but my mind was racing…”won’t stay awake”.  This kid is 90 to nothin’ all day long usually, this is WEIRD, something is not.right.

At a break in our meeting I rushed to call Andrew to find out what was going on.  Apparently mid-morning R had become pretty dazed and confused and was cranky so his teachers put him in his crib, at which point he basically passed out asleep.  They knew this wasn’t normal for our child.

Andrew was on the way to the doc and said that R was pretty out of it, his eyes were really droopy.  What on earth!?  He was completely normal this morning.  I racked my brain to remember if he’d somehow gotten into anything that could have affected him and could come up with nothing.   “Let me know what the doctor says” was my only reply.

Not long after, I received another text, “Double ear infection”.  Bless.  This poor child has had more ear infections this year…and I know he’s just got to be miserable.  He’s got tubes, they were put in in April, and thankfully this is the first ear infection since then, but double?  I felt for him.

BUT, The party will go on!  YAY!!  Thinking that he’s not contagious, just really cranky (which he was for the first part of the party), we’ll get to keep this event on the calendar and not have to cancel like the events before.{Remember these: Hijacked,  Hijacked – Day 2 and the Hijacked Happy Hour}

A friend asked last night, “are you going to blog about tonight?”  At which point I had to think for a moment and then I said, “probably not…it’s been pretty low key.  I mean, no one is doing keg stands!! HA!”  Not that we had a keg on which you could “stand” but you get the picture.  It was low key.  Friends enjoying the company of friends.  Some friends were catching up and new friendships were being made.  It was great and I was blessed.

By the end of the night R had taken a “cat-nap” and was somehow re-energized to mingle with his guests!  He was running around with the Swiffer {my son, the janitor…}, talking, laughing and just being a ham.  Good ol’ Reynolds…he was back! 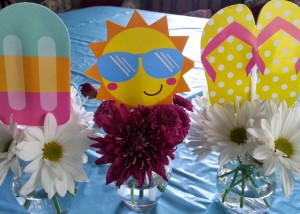 It’s the official First Day of Summer today.  Get out and catch some lightning bugs tonight or just have some friends over and enjoy some summer fare!