I didn’t understand, or rather, was confused for a few reasons.  For example, the clock ticks up instead of down…unlike my favorite, football (the American version!).  And then the Ref somehow adds on an arbitrary amount of time at the end once the time has technically run out (or run up…)?  That doesn’t make any sense to me.  How is that possible?

Not to mention a few other things.

So this year, with the hype of the World Cup, I confessed to my beloved husband (who played soccer in high school) that I didn’t know anything about, nor did I understand soccer.  And like any good husband, he taught me. 🙂

Just in time for last night’s game of USA v Ghana.  I’m thankful that I knew some of what was going on and could appreciate the excitement when my husband was jumping around like a mad man!  I’m not saying I did, but I thought the TWO scores by the US of A were pretty great, especially that last one.  Who doesn’t want to make an incredible SCCCOOORRREEE using their head?!

Next match is against Portugal this coming Sunday….maybe I’ll wear some Red, White and Blue (but I won’t paint my face!) in support of our team and jump around with Andrew when we score!  How about you? 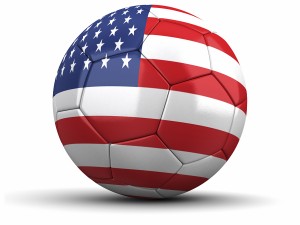 **Ps..my husband just notified me that it should be “GOOOAAAAALLLLL” instead of  “SCCCOORRRREEEE”.  I’m still learning!!