I am quickly checking things off my #10weeksandcounting to-do list for Eliza Jane…there are only 8 weeks left! 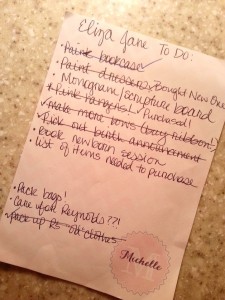 One of the items I’ve checked off is her dresser/chest of drawers {or if you’re southern like me, it’s  “Chester drawers”}.  I found it a couple of weekends ago at Target.  I’d not intended on buying anything new.  In fact, that Saturday morning, Reynolds and I set out for a local shop that sells unfinished wood, but when they didn’t open until 10 (we were out early…), I moved on to the next stop.  We went to a fun consignment shop that my friend, Dana frequents (maybe more than she’d like to admit…).  It was my first time going and I was really excited.  More so, when I drove into the parking lot and there were people waiting to get in.  It wasn’t quite like the crazy rush the morning after Thanksgiving, but sort of close.  I got R out of the car because he’s a bit of a squirmy thing and while he practiced going up and down (up and down, up and down…) on the sidewalk, more and more people were lining up.  I was intrigued.  This place must be THE.PLACE.

Once inside we strolled around looking for anything that could be used as a dresser or chest of drawers.  In my mind, I was thinking whatever we found, I would paint it white…or maybe pink.  Or maybe white with some pretty knobs that had some pink in them.  I was open to whatever I might find. 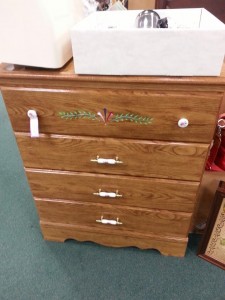 This was the one I liked the most…and at $175 I didn’t think it was terribly priced.  It was cute, had a little detail…and painted white with some pretty knobs, I thought it would be quite lovely for sister’s room.  I snapped a picture of it and shot it off to Andrew (who was out looking for appliances for a rental house).  He texted back, “isn’t that a bit high?”  Which meant, “I don’t like it enough for the price, move along”.  I grabbed the kid, who by this time was about to lose his mind because he wanted to play with every.thing he saw and I was getting quite the workout.

Next we went to Home Goods…it was a strikeout.  They only had small end tables and other pieces that were definitely over-priced.  A few stores later and I was feeling tired and defeated.  I called Andrew and said, “We’re done.  I’m coming home…Chick Fil A for lunch?”  At which point, the bullseye caught my eye. You know, Target.  They’ll have something…and probably reasonably priced.  I tried not to cut off the person in the left lane {I waved…that counts for something, right?} and into the parking lot I turned.   I reminded myself of my previous Target post and went into tunnel vision.  Dresser ONLY.  I turned the corner and there she was: 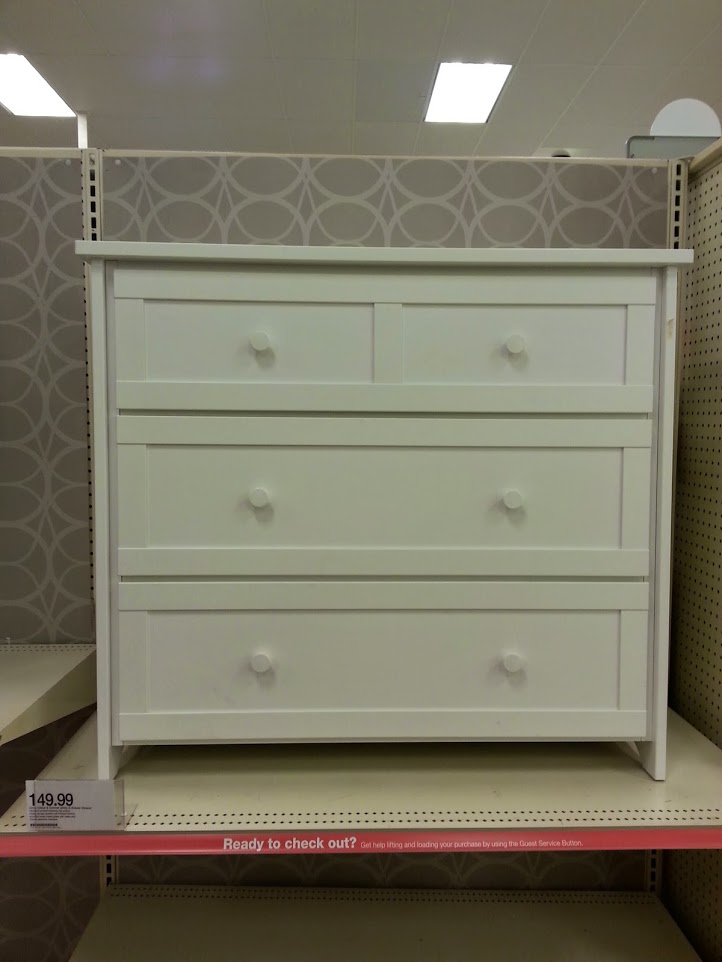 There was only 1 left.  I took the picture, sent it to Andrew and hovered over it like a buzzard in the country.  Andrew called, “Looks good.  Where are  you?”  Under my breath and almost ashamedly, I said “Target.”  He laughed and told me to get it.  I flagged down a sweet girl in a red shirt and after a minute or two she appeared again with a flat-bed cart.  She loaded the box up and off we went to the register.  Me and my 1 item. 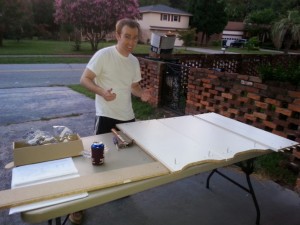 This weekend, after returning from our family reunion trip, Andrew went to work on putting together Eliza Jane’s dresser.  {He stated pretty early on that he threw away the ridiculous instructions because they were of no help!} 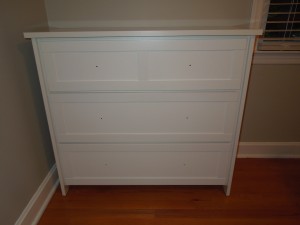 After a couple of hours (seriously), it was put together.  I’d already decided I wasn’t going to use the (blah) standard knobs that came with it.  I’d searched a few places online for something pretty…painted knobs with some pink, glass knobs, etc.  A few places where I found some really lovely ones were of course Anthropologie and World Market.  For whatever reason, none of the painted knobs really “spoke” to me like I’d hoped so I ended up going with the Clear Floral Glass Knobs at World Market. 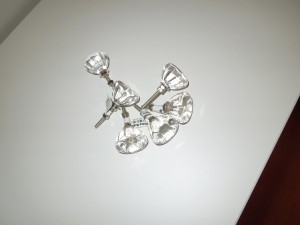 Dana picked them up for me one day while she was out running errands so the other night after Andrew had put the beast together, and we’d hauled it up the stairs (I almost went into labor the thing was so heavy!) I added the pretty knobs…. 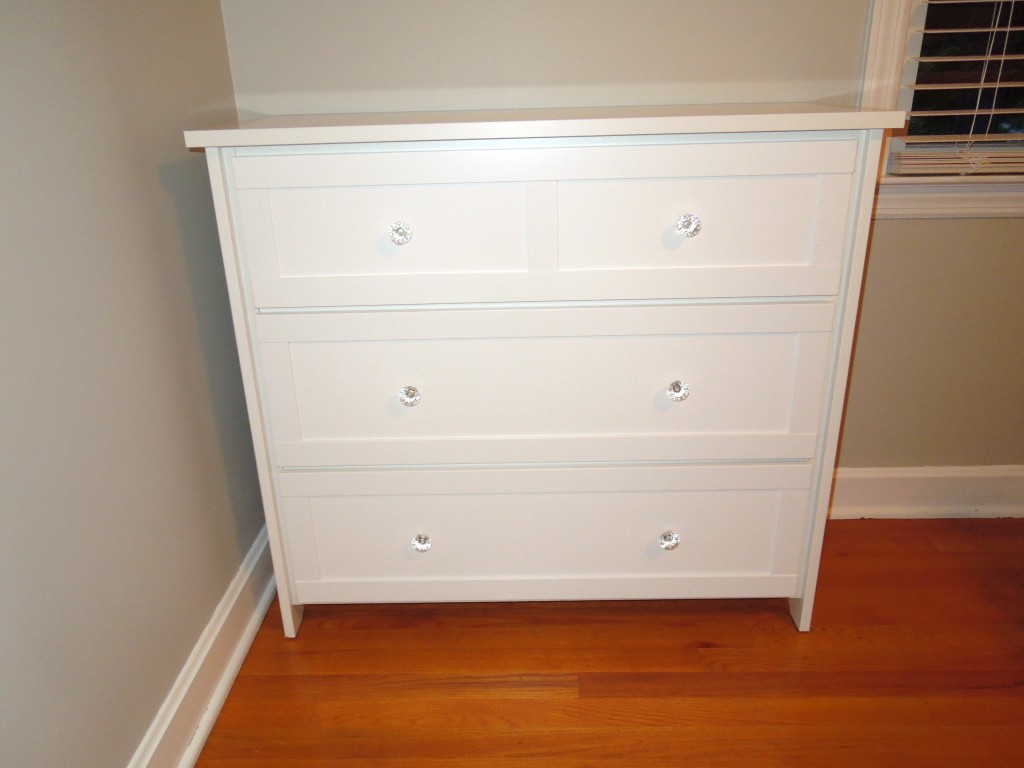 Voilà!  It was complete. 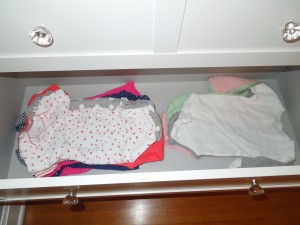