For the 4th of July this year my family planned our yearly family reunion…at Hickory Knob State Resort Park.  The plan was to go Friday….and be there around early/mid-afternoon. Andrew and I gotten up early and ran errands, packed the car {to the hilt} and were on the road by noon.  The plan had been to leave then because that meant Reynolds would sleep the whole way of what was an almost two hour trip. 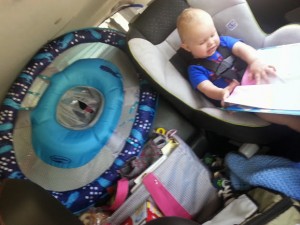 Less than ten minutes into the drive and the kid was out cold.  Perfect. I had my BHG magazine and Andrew was cruising down the interstate.

Next thing I know, Andrew says, “I think this is our exit.”  So off we go. I pulled up Google maps and stated, “…this is a bit early, but if you take a left here we can go that way”.  While messing with the maps I was being told by my “smart phone” that I needed to download the “new voice” so I did.  About that time that we realized we were in some heavy traffic.  Andrew and I both were puzzled.  We’re on the back-roads…why all the traffic?  “What the…” There were cars parked and people everywhere.  Andrew says, “..is the peach festival this weekend?” I said , “Drew! Are you kidding?! Is it today??!” And of course we knew the answer….yes, of course it was today. 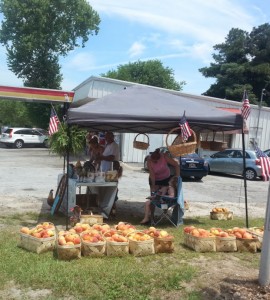 We didn’t need to see all the people with their bags of peaches or the road-side stands or the sign that was proudly waving across Main Street showing that today was the day! We both laughed hysterically.  And then we hear someone else laugh…R had woken up and thought that we were just hilarious.  We laughed even harder.  A 30min nap was not going to cut it. He was going to be exhausted by the end of the day.

As we laughed we determined that if we turned right we would quickly deter the traffic.  Google rerouted.  Then this new voice came over my phone.  An almost sultry voice that was telling us: “4 miles and then turn left.”  Andrew was dying over in the drivers seat and I was about curled up in mine. Then Andrew said, “What is happening?! Who is this woman talking to me? is Black Velvet about to start playing?!” Me and my 7month maternal body almost lost it.  Once again Reynolds thought we were completely hilarious.  He had no idea what we were laughing about, just that we were laughing and that was enough to make him giddy.

We talked and played and laughed as we cruised down highway 378.  Every now and then Andrew would make some comment about how he just could not believe(!) there were not “hot boiled peanut” stands.  Why, if we were going the opposite direction on 378, towards the beach, there would be one about every mile, on both sides of the highway!

8 miles from our destination and there it was, the “HOT BOILED Peanuts” stand.  The folks running it asked if we were going camping.  I thought that was hilarious.  Me?! go camping?? not in your wildest dreams, mister.  I like plumbing and electricity.

We got THE very last peanut in the pot and as we pulled away for our last 10 minutes in the car, Reynolds starts hollering for something.  And at the same time Andrew says, “..how about a peanut?”  So close your eyes if you will….imagine a toddler, who cannot speak English, hollering at you – for some mystery item, while your husband has reverted back to a toddler, who CAN speak English, and is asking for boiled peanuts. over. and over. and over again. I put my hands over my face and almost cried laughing and finally just said, “Aaaaahhhhhh!!!!!  I’m driving next trip!!!”