I debated on calling this post, “A Close-Call For Daddy” or “An Almost Daddy Hi-jacking By Reynolds” but decided on “Daddy Luck” given the destination of this topic.

As some of you know, Andrew went out of town last Thursday.  To VEGAS.

One of Andrew’s best friends from high school is getting married at the end of September so this was his bachelor weekend.  Andrew was very involved with the planning and execution of the weekend’s events and this is one of the few people he would go to Vegas for so we made the necessary plans for him to be gone.

The guys flew out Thursday evening from Columbia.

Earlier in the morning I had taken Reynolds for his 15 mo checkup, where he got 2 shots.  He did fine at daycare and seemed “normal” when I picked him up that afternoon.  Everything went well that evening and he went to bed like a champ.

Sometime around 11:15ish Andrew called to let me know they’d landed in Vegas.  Not long after, I heard R sort of fussing and the next thing I knew he was in an all out scream/cry-fest.  He’d thrown up everywhere.  Every.Where.

What.on.earth. Had happened?!  I snatched him up out of his crib and ripped off his pajamas while he laid on his changing pad moaning with his sweet eyes closed.  I kept reassuring him that he was “ok” and told him how sorry I was that he’d gotten sick.

We went to our bedroom where I laid him down in our bed and tried to soothe him back to sleep, but by this point he was awake, thinking it was play time….

I texted Andrew to let him know what had just happened and told him he was so lucky to have gotten out when he did!  He half couldn’t believe it and we both laughed a little that of course this would happen!  Given the history of our year so far in the making of plans, R is going to do something!

Thankfully, the sickness didn’t last and we both survived without daddy (though there were tears from at least one of us each day….).  I posted on my Facebook this morning what an amazing husband and father Andrew is and I truly mean it.  He is the butter to my bread. 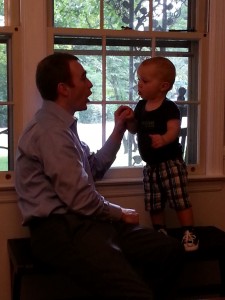