Today was another hi-jacking by Reynolds.  Bless the poor, sweet child.  We’re fairly certain that he’s teething, but when we were getting him ready for daycare today, the thermometer read 100.4.  Which meant, he wasn’t going anywhere.

Quick decision making, who’s staying home and when.  “I can’t be home all day, I’ve got meetings and other things to take care of…”  I stated, in my I-only-have-a-couple-of-weeks-before-I’m-gone-for-at-least-6-weeks inflection.  “I’ve got to get payroll done…” Andrew said matter-of-fact-like.  Dang.  What a day.

I took the first shift while Andrew headed to his hotel.

Reynolds was super needy…more needy than I’ve ever seen him.  Like, can’t leave the room without him losing his mind kind of needy.  He constantly wanted to be picked up and held.  If I put him down or even made a move like I was going to put him down, he started crying.

Something is not right.  Thank God for the drool.  He’s got to be teething.  There’s nothing else that could be wrong.

Side note, we had to take him to the doctor Friday afternoon due to some incessant screaming/crying at daycare and had his ears checked…clear.  Nothing there.  Blood work showed no signs of infection.

Back to today.  He’s not really had an appetite the past 24 hours.  He woke up about 4 times last night crying.  All signs are pointing to teething for now.  Around 11:30 this morning I was holding him and it was clear he wasn’t going to leave my side.  I sat down in a comfy chair, snuggled him in next to me, put a blanket over our legs and handed him his bottle.  Less than 10 minutes later… 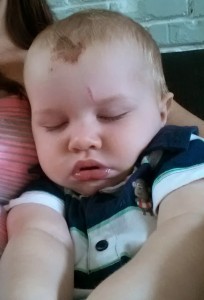 So I took the little guy upstairs to his room, rocked him for a few more minutes and put him down.

Andrew came home and took the 2nd shift.  He said he pretty much had the same experience I did.  Lots of crying and fussing.  Very little eating and lots of drool.

I guess this is what we get for jokingly asking R where the rest of his teeth were…looks like they’ll be making an appearance sooner rather than later.

Sleepless nights are here for a while….prayers are appreciated.