Well, as usual, it’s been an adventure in Lucas-land.  Some friends have asked about Reynolds and his accident from last week:

Last Friday afternoon I received a call from daycare…Reynolds had woken from his nap screaming and pulling at his ear.  He continued this screaming and thus, I received the phone call.  The teacher (she was new to his class) said it “scared her”.  I had no vehicle.  Of course this was the day that my car was in the shop for it’s (way overdue) oil change, rotation, etc.  So I called Andrew.  He said he would come get us.  I walked over to daycare, where, upon arrival, our regular teacher was in the baby room with Reynolds and she said that “Reynolds is Reynolds, nothing is wrong with him”.  We took him to the doctor anyway to see if he had an ear infection.

At the doctor’s office we were told that there was no ear infection, but he could possibly have a heart murmur.  While the doc was listening to his chest I could visibly see that he was in.the.ZONE.  This man (whom we had never seen before) was listening so intently, I was sitting there thinking to myself, this dude is serious…what is he trying to hear?

So as he explained what he thought he was hearing, he recommended blood work to see if there was an infection. Down the hall we go…Reynolds gets his finger pricked, and screams his head off.  {For whatever reason, I always think about “Elf” where Buddy says, “my finger has a heartbeat” and then eats the cotton ball he’s been holding on his pricked finger.} 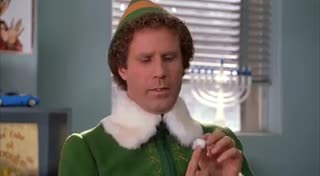 Why doesn’t Reynolds act this sensibly?  Or any child for that matter…

No infection.  “We’ll order the echo with the cardiologist’s office” we’re told.  Great.

We leave, go get my car and then R and I headed home.   It wasn’t 100 degrees outside (like it was today!) so I said to R, “hey bud, let’s go outside while we wait for daddy to come home.”  We get outside, I spray him down with OFF so the mosquitoes (DIE! DIE! DIE!!) don’t tote him away and he starts playing.

The kid loves to discover that he can do new things…like, climbing up and down the steps at the back door.  Why I’ve not figured out yet that my son is his father’s son…and the two of them are accident prone {Andrew has an “oops Andrew” fund – ok, not seriously, but we’ve joked about setting up one…}.

I’m watching my son go up and down this step and he’s so proud and I’m telling him what a great job he’s doing and he’s so excited.  Up to the second step he goes.  Um, wait.  Reynolds, maybe not such a good idea.  But he does it!  All by himself.  He manages to walk down both steps with no help and without issue.  Until.

He took his eyes off the task at hand.

He stood back up on the top step.

Just like Jack from “Titanic”…and it was like he was about to declare to all of creation, “I’m king of the wwwoooorrrrlllddddd” 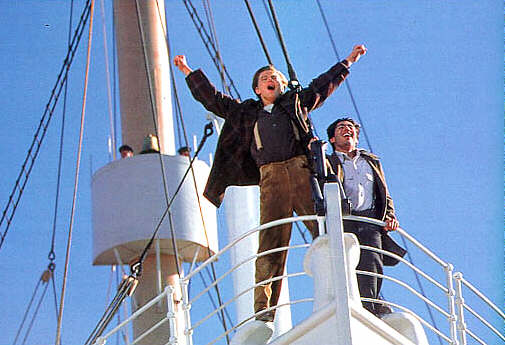 Superman is laying flat on his face with his feet in the air…arms sprawled out above his head.

I’m not sure I’ve ever moved so fast in my pregnant state.  I snatched him from the ground, and almost in the same instant, the piercing screaming started.

Fast forward to after bath time, dinner time, to getting ready for night-night time.  We’re in his room playing and reading books.  He’s not showing any signs of a possible concussion (I was terrified) and seems to be doing fine.  Daddy comes home.

I didn’t tell Daddy.  I thought, I’ll just let him see it.

Daddy opens the door to R’s room, R’s back is to the door.  I said, “we may have had an accident…”  And as if right on cue, Reynolds turns around with his sweet “Da-da” voice and Andrew’s eyes bug out of his head.  “What the HELL?!” 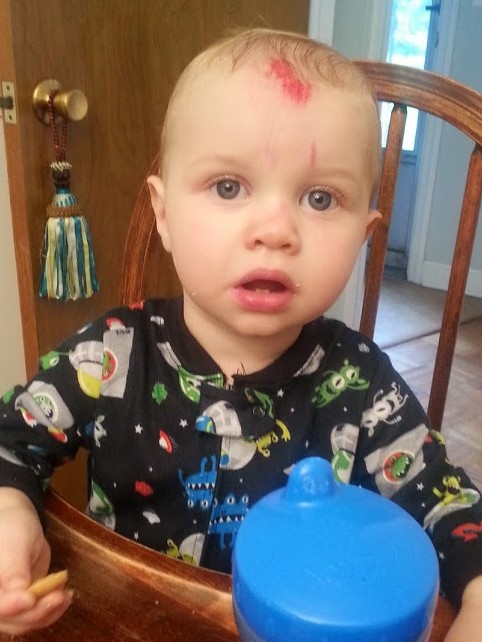 Oh, it’s comical now.  But at the time I thought, are you kidding me.  We just got home from the doctor’s office.  And now this.

As far as the murmur and echo…I hope to be able to share with you more about that tomorrow.

For now, the update is: Reynolds pulled off the scab on his head last night and it doesn’t look so bad.  We’re still slopping on the Neosporin at night and his teacher puts it on during the day.  As for him climbing up and down steps like a big boy…he’s been banned.