I’m a card person.  A paper person maybe.  I love stationery and pretty things on which to write notes, messages and anything else.  I’m not entirely sure where this love comes from, but as a child my grandparents sent me cards for special occasions and when I was in college I would receive sweet notes from my mom and friends.  It was always so exciting to receive a pretty envelope that you knew was not something about grades or a bill, but a letter…from someone…who was thinking about you.

So in college I had a box of stationery…pretty papers, envelopes and even stickers for writing and sending letters.  It has carried into this home but instead of just a box, I have a little two drawer chest that mainly has all of mine, Reynolds’ and Eliza Jane’s stationery.  Remember last year when I bought thank you cards for the kids from Tiny Prints?  It’s got stationery that I received when Andrew and I got married: pretty red cards with my new initials embossed on the cover.   Cards that Andrew had made with my new initials as well as some that have “Mr. & Mrs…..” which are so special.  Then I’ve got random paper in there like graph paper (from highschool(?!), resume paper, fun scissors, all kinds of pens, markers, color pencils and crayons.

I think it was last year, that I announced to my husband that I didn’t particularly want (need) a gift for Mother’s Day, but rather, I just wanted a card.  And a hand made card…using paper, crayons, markers, scissors if needed, etc.

I got just that.  A card made from construction paper that had a sweet note from my husband, a traced hand of Reynolds and even something from Eliza Jane (who had not even been born yet).  Talk about special.  That’s better than anything I’ve ever received from Hallmark (not that I don’t love Hallmark).  For Christmas and Valentine’s this year Andrew did the same – he gave me an “Andrew card”.  They’re the absolute best!

So today, when I was asked by the Tiny Prints community board what my favorite gift has been so far, I almost said the simply gorgeous lilies Andrew got me for my birthday that were seriously the most beautiful flowers I’ve ever received.  Or the fun dishes I got for my birthday – that a special group of friends had collaborated together on, or even the kimono-ish robe I got in the mail from another friend.  Nope, I submitted that it was the hand made card I’d received from my husband on Valentine’s Day.  Where he used a piece of résumé paper and crayons.  He even drew red hearts on the outside.  On the inside was just a sweet note from him that speaks more truly than any Hallmark card could.

Maybe it was the time he took to do that, and not just his creativity, that makes it so special.  Yes, pretty sure that was it.  But paper and crayons, they’re not just for kids. 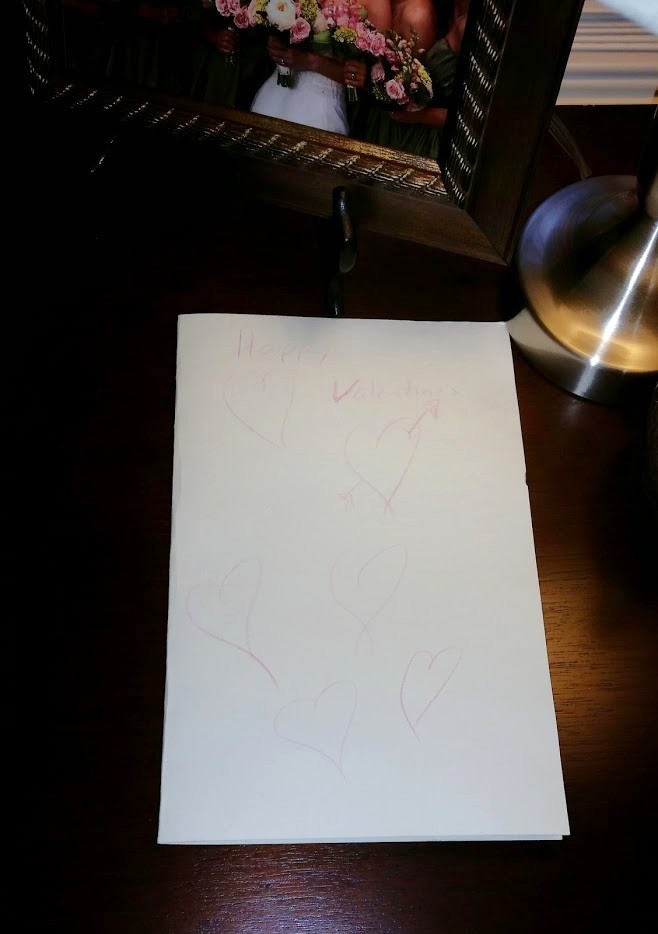