This Saturday I have the joy and privilege of throwing a baby shower for our dear friend, Dana.  She’s having a baby girl in about a month {eeeeeek!} and we are beyond excited for both her and her husband {they’re both in for a life changer!!}  When they first told us they were pregnant – right after Eliza Jane was born – I immediately told her I wanted to throw her a shower.  One of many, I suspected.

I started planning pretty quickly.  Dana is a glitz and glam kind of girl….and I am not.  So this whole adventure of turning on my girly-girl side has been a load of fun.

In part of getting back at her from littering glitter all over my den at Christmas, and partly due to her glitz and glam, gold glitter is making a major appearance.  MAJOR.  Get ready DanaDane!

For starters, here’s the invitation {with my glitter statement already added} 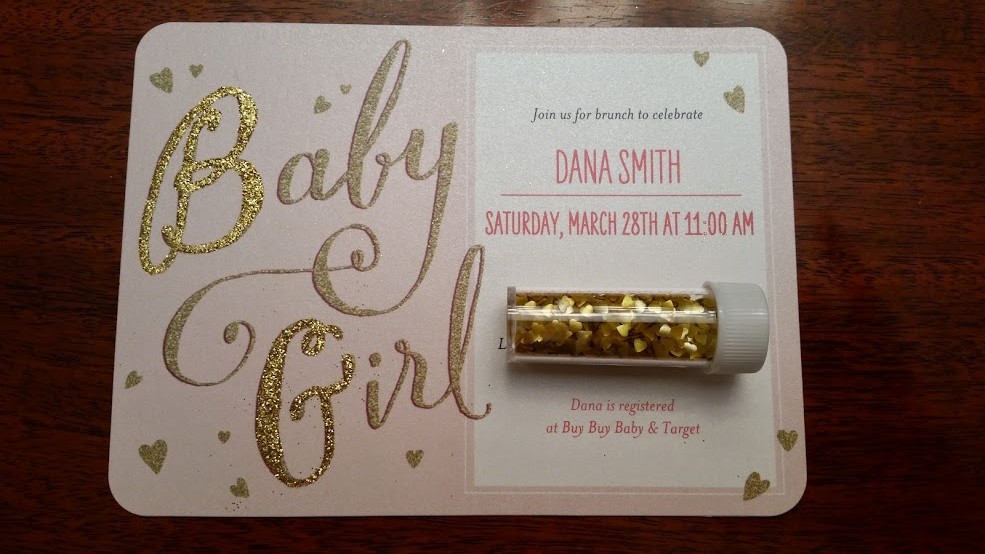 I started to dump some glitter into the envelope so it would come flying out all over her, but I didn’t.

I really wanted something that was full on glitter.  I couldn’t find it.  I searched everywhere.  This was the closest I could find to real glitter.   My tried and true, TinyPrints.  The product info said that if I used the pearl white shimmer paper it would come out more like glitter.  Well.  Sort of.

This still wasn’t going to cut it for Dana.

I put on my arts & crafts hat {I AM NOT CRAFTY SO THIS WAS HARD}.  I spent an hour in Michael’s one Saturday afternoon while the kids were napping and I’m quite sure Andrew thought I’d either flown the coup or was spending every penny we had.  The later was probably more accurate 🙂

While at Michael’s I searched….up and down every aisle….looking.  What could I use?  What would work?  What would turn my invite {that I hadn’t even ordered yet} more glitz and glam for Dana?

Glitter.  And lots of it.   I left the store that day with all kinds of glue – spray, pens, tubes, roll-ons, and gold glitter out the wazoo.  Little tubes, big tubes, small canisters and big ones.  Even gold glitter paint.  The only thing I didn’t purchase was the Krylon glitter blast spray paint.  But hey, I still have 4 days before the event! wink. wink.

So I came home and proudly displayed all my supplies on the dining room table.  Andrew couldn’t have been more excited.  NOT.  He was being invaded by this crazy person who was obsessed with pink and gold and GLITTER.  Nevertheless, I continued on.

When the kids when down to bed, I got to work.

With my paint tubes and paint pens, glitter paint and glitter canisters, I sat down and plotted out my ideas. 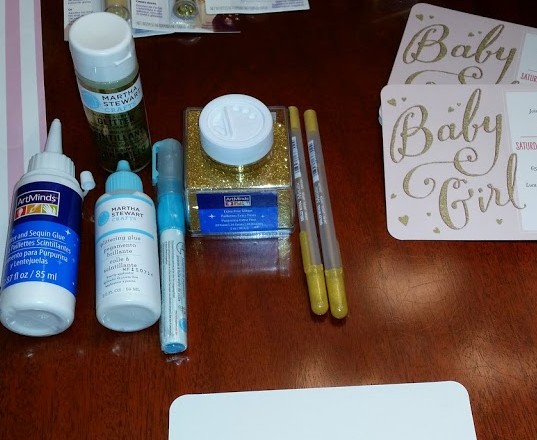 I started to spray the whole thing with glue and then sprinkle glitter all over it.  Too much, I decided.  This needed to be purposeful and precise.

With my glue pen and glitter canister {and some paper to contain the million glitter particles!}, I tried out a B and G.  Not sure what I was thinking with the smallest font ever, but this is my initial try out.  Sad.  I told you I wasn’t crafty! 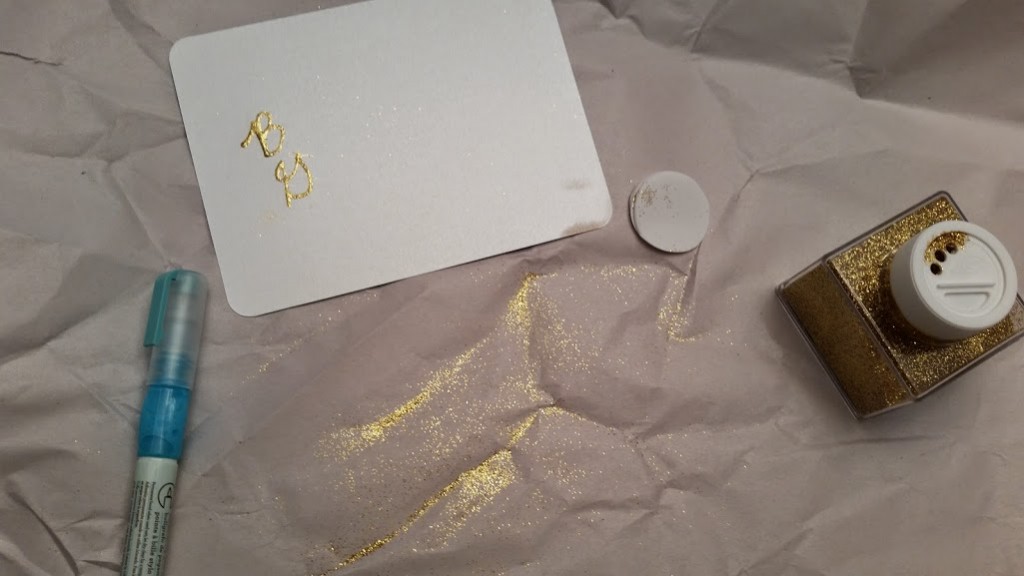 So next I called in Andrew for help.  I traced out the B on the invitation with my Martha Stewart glue pen {which I am now in love with!} and added a lot of glitter.  A.Lot.Of.GLITTER. 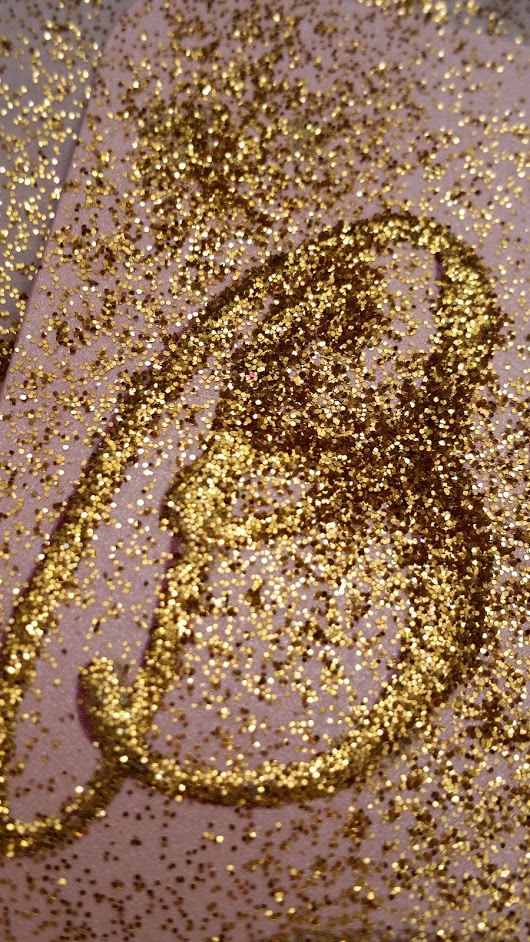 Andrew said, “You should do the G too”.  I wasn’t convinced but felt like I had enough invites that if it looked completely horrible, I would be ok with one going out like that – it could go to my mom – she would love it!

So I traced out the B and the G….and added A LOT OF GLITTER.

It turned out a lot better than I’d anticipated.  It was pretty…I liked it.  I kept going until they were all done.  All 25 invitations had been gliterized.  So had my dining room table.  So were my hands.  My little dust-buster got a good workout that night {along with the lint roller!}.

Being a stationery nut, I had matching return address labels made and then addressed the glitter invites to her friends and family using a gold pen.  I’ve tried to think of everything I can to make this day really special for my friend.  I know it won’t be Hollywood caliber, but by golly, there will be gold glitter!!!