The first time I heard the word, “sursy”, I had recently moved to South Carolina and someone brought me a candle and called it a sursy.

I recently had this conversation with a new co-worker, who moved here from Denver, Colorado just a few months ago.

She’d never heard of the word either.

So of course, like a good southern lady, I told her what a sursy is.

First, I googled it, so she wouldn’t think I totally made up this somewhat-of-a-silly-sounding word.

The urban dictionary {as opposed to the SUBurban…} states that a sursy is: a term commonly used in the South to denote a small, unexpected gift…for no special occasion, particularly to show affection or thanks.

Now, I am from the South.  I am southern, born and bred.  But I’m telling y’all, I’d never heard this word, ever before until South Carolina came into my life.

Of course now, I love to use the word.  The word itself just sounds friendly.  For those of you who don’t know, it’s pronounced like “sir see”.  I enjoy finding little sursies to gift to friends or coworkers.

When Andrew and I were in our pre-marital counseling we discovered that neither of us was {is?!} a good gift giver…as in giving sursies…unexpected gifts.  Sure, we’re great at the birthday, anniversary, the um, important dates.  But not really the unexpected.

And as I write this I’m thinking that I probably need to find a sursy for him…because he’s not gotten a sursy in a while.  hmm.

Anyhew, back to everyone else!  ha!

The key to the sursy is that it’s unexpected.  And inexpensive.  For me it’s the something that says to the recipient, “hey, I saw this today, thought of you and wanted you to have it.”

It can be a small candle {like I received}, a pretty little trinket holder, a neat/unique pack of notes.  I even gave someone some witty post-it notes once because this particular coworker had post its lining the shelf above his head.

I don’t give sursies often…that’s what makes them unexpected!  And I wait for things to speak to me.  Kind of like the Pier One commercials where the birds or the gnomes start talking to the lady shopping.

Ok, I know I sound crazy now.  But take today for example.  I saw a pretty little dish with a fabulous little saying on it and thought, “that’s perfect for…!” 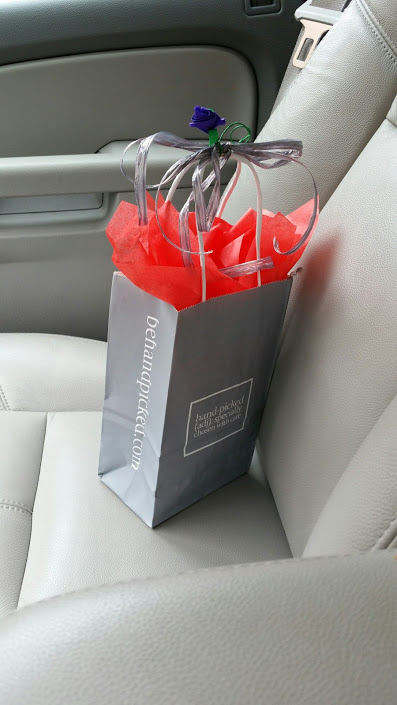 I didn’t hesitate.  I grabbed it, put something I had for me in my hand, back on the shelf and made my little purchase.  And yes, I’ll take the gift wrapping because I want that tiny little rosette!!