Have you ever planned lunch with a friend and then said to her, “Where do you want to go for lunch?” and then you carried a 10-15 minute conversation about the fact that neither of you REALLY cared about what KIND of food you ate, but no one would decide on WHERE to go?

Well, that happened to me today.  I had planned to go to lunch with a co-worker friend and upon us both stating that our stomachs were growling {more like roaring}, we commenced the conversation about where we would go.

She suggested one place and then said she was craving Chinese.

“I don’t really care where we go…but I don’t know of a Chinese place around here.” I told her.  She mentioned a hole in the wall that had a really original name {not really}, and once I told her I didn’t really have a preference…well, somehow we were left in the same predicament.

So off on a walk we went…destination unknown.

We got to Main Street in downtown Columbia and noted what restaurants lined the street. 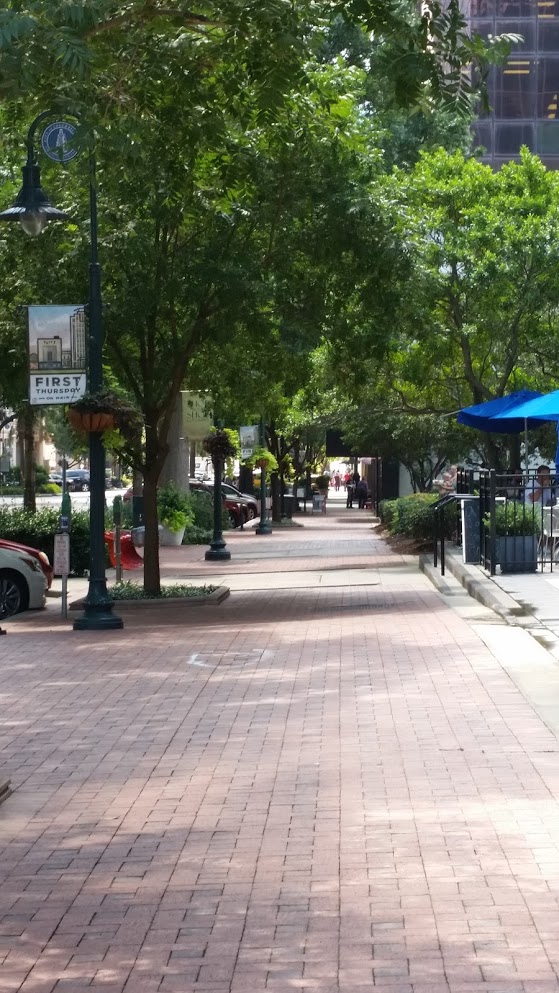 Unsure of what we were really looking for, we kept walking.  Stopping in a window to view a menu…where everything just seemed, well, normal…blah, I guess.

I figure we were looking for something spectacular…

We got to this little spot named Drip, where of course they serve coffee…and not really being a coffee drinker myself, the smells were intoxicating.

But how was the food?

They legitimately had I think 8 things on the lunch menu…actually, I checked {and if you click over there you’ll see it} and I was right!

We looked at each other and kind of gave the “Eh, I guess we could eat here…?” look.  Neither wanting to make the decision I guess…

She asked if there was anything on the menu that I would choose, “The Turkey & Brie or the PB&J…” I told her.  Hey, I don’t get too crazy with my lunch options.

She got the Muffuletta Panini {I wouldn’t dare…} and I got the Turkey & Brie.

We sat outside and thanked the good Lord for a gorgeous day.  Saw some friends walking down the street and talked about life.

Our food came…She thought her Muffuletta and olives were divine.
She even dropped this huge red olive on the table after taking a bite and said, “Oh, my goodness!! This is so good, I’m going to wipe it off and eat the rest!” 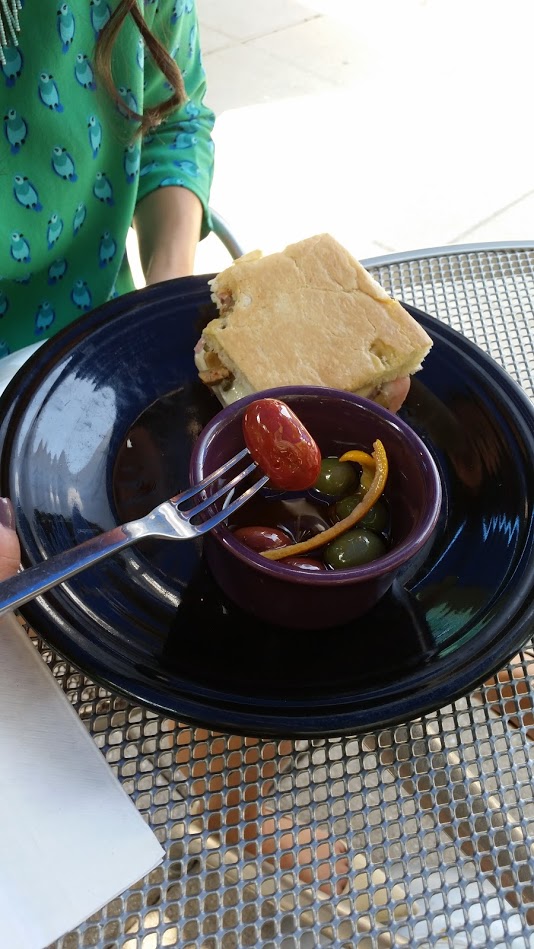 She kept offering me bites of her food, telling me how I was missing out…I totally forgot that she’s a food-sharer!!  And I should have offered her some of mine!

“No.m’am.” I politely told her…a couple of times.  HA!  My sandwich was fantastic.

I mean, look at that brie just oozing out of the side… 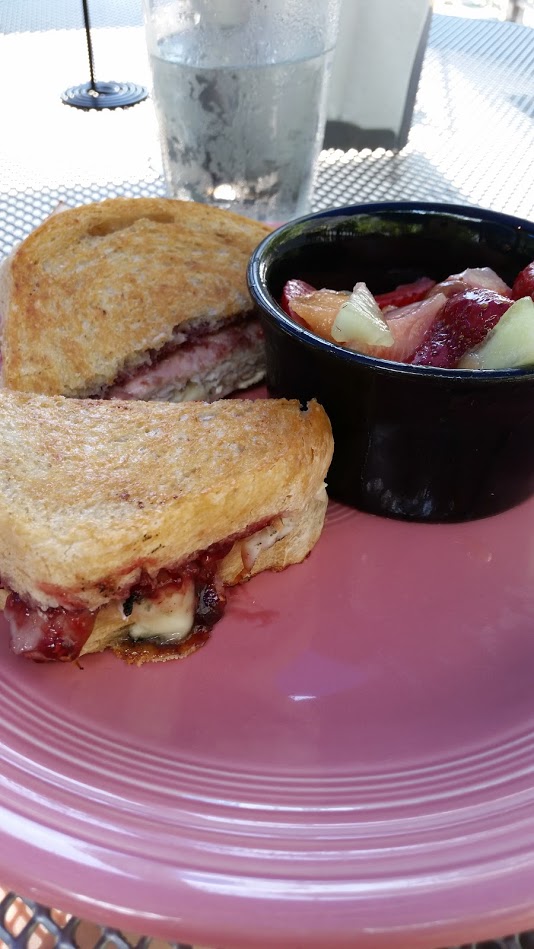 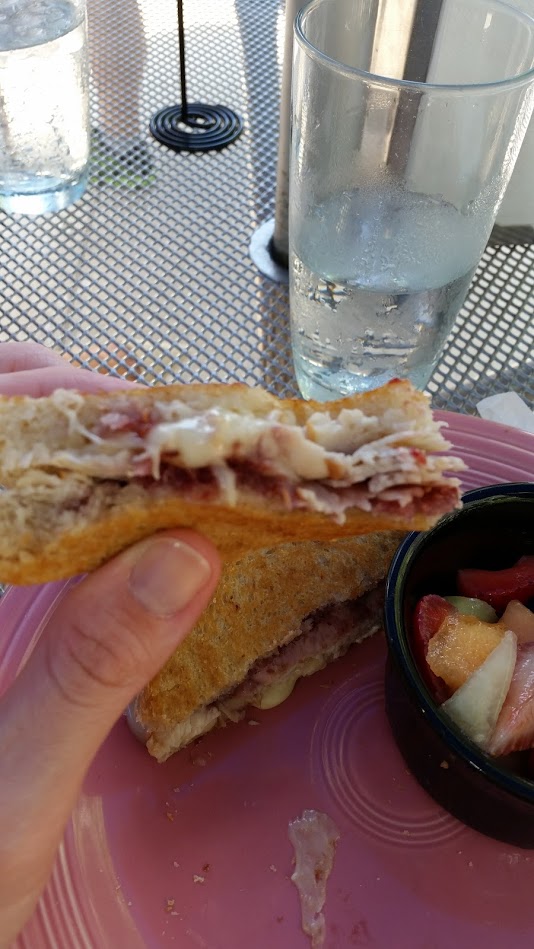 We did talk about how I was going to blog about the place and our food, and how we should take a selfie.  Really, we were being slightly silly at the time…or maybe it was just me.

Instead, she took a picture of me eating my Turkey & Brie. 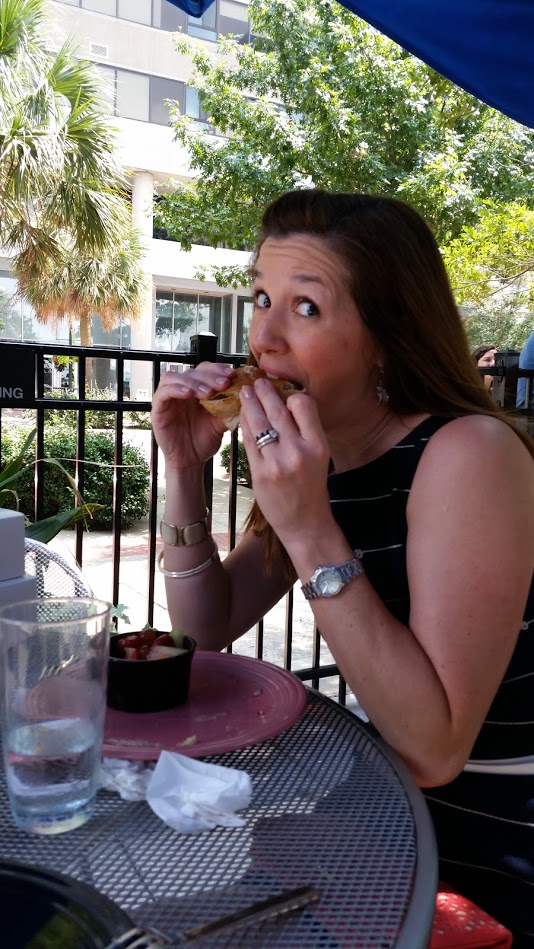 Let’s just say that I won’t be trying out for the Hardee’s burger-eating commercial.  bahahaha.   How can you look sexy/pretty/beautiful/NORMAL while eating a sandwich anyway?!

I hope you had a fun lunch today…if not, go somewhere unexpected tomorrow!