Can I just start this off by saying that last week was particularly crazy in the life of the Lucas family?  Holey moley, I can’t even believe we did all that we did and lived to tell anyone about it!  I took a short hiatus from Camellias and Copper mainly because my head was spinning almost out of control…

I made it back home safely last Wednesday afternoon {many thanks to United airlines for not jacking up my flight as American had previously done on Sunday}.  Hubs was there to pick me up at the airport and bring me home so that I could continue working in my jeans and not have to change into a dress to go into the office 😀

As y’all know Halloween was on Saturday so last Monday morning while on the way to Wichita, KS with co-worker Kelly,  I was making last minute preparations for the kids’ costumes.  I decided that we just didn’t have $50+ to spend on a faux leather jacket for R – that he wouldn’t even wear ever again, so I was on to idea #2.  I really wanted something easy, DIY that I could do quickly…and that the kids would compliment each other {I now have tons of ideas…Fireman + Dalmatian, Charlie Brown + Snoopy…why would Eliza Jane always have to be a dog?!…}

I knew I could make Eliza Jane a strawberry costume, mainly because I have one that my mom made me way back when and all I really needed was felt. 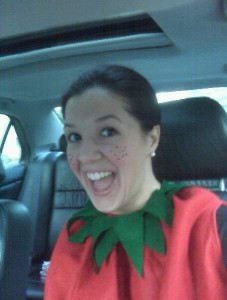 By the way, felt is like the easiest material…albeit awkward, stiff and hot…

For the life of me I couldn’t figure out what to do for R that would be equally or more easy and would go with a strawberry.

hmmm….what could go along with a strawberry?

I pondered and finally posed my dilemma to Kelly.

So then we went crazy trying to find a place that sold toddler overalls.  Kohl’s is the only place.   Well, the only one that we found.   I also Facebooked some of the moms with kids in R’s class to see if anyone had a pair he could borrow.  {What did we do before Facebook?  We spent hours on the phone calling mom after mom in our endless search!}.  So on our “lunch” break last Tuesday, while I was still in Kansas City, we went to Kohl’s for overalls and a flannel shirt for R and then Michael’s for some red felt for EJ.

Back to Wednesday….after I got home {thanks again, United!!!}, and the kids were put to bed – they were SO happy to see me!!! – I started on Eliza Jane’s strawberry costume.

I had purchased two pieces of 36in x 36in felt and only need one…or maybe half of one! ha.  I grabbed a little dress of hers so I would have some frame of reference for a starting point of how big this thing needed to be… 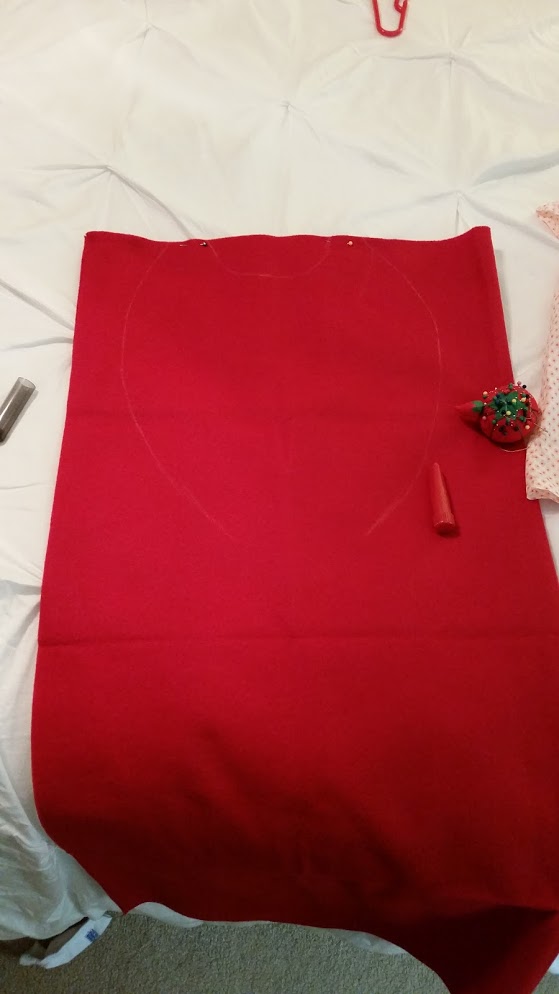 I made a brief little trace with my chalk, folded it in half and then cut. 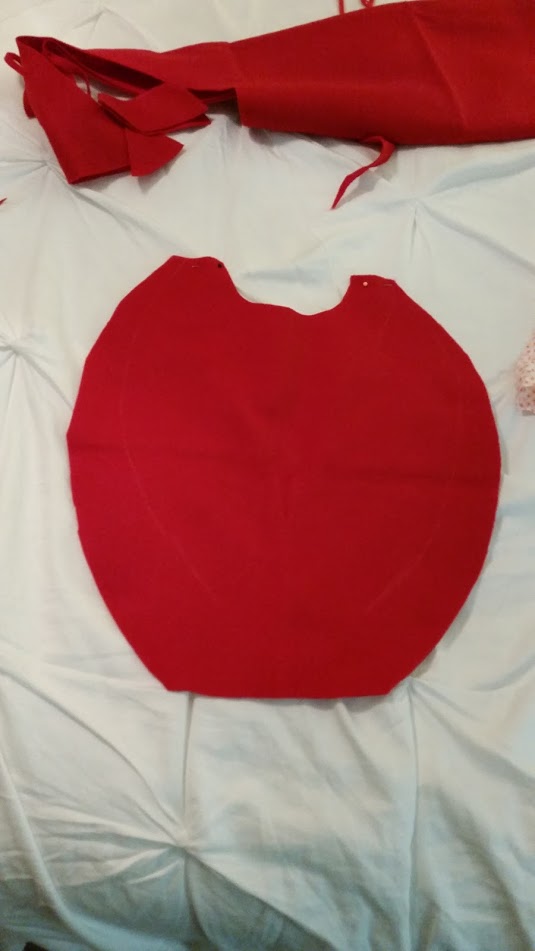 I hand-stitched the two shoulders together.  Next, I knew I needed a little collar to look like leaves, so I used the neck of my strawberry as my template for the initial shape of the collar.  Oh, and the green felt was left over from last year’s costume where R was Peter Pan {and EJ was Tinker Bell!}. 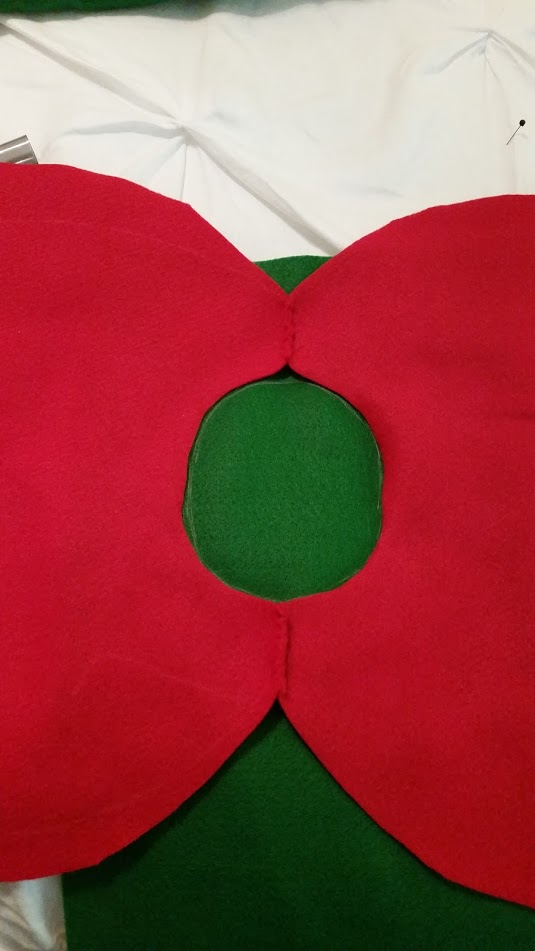 Then I cut leaves into the collar and opened it up.  I didn’t take a picture, but I super glued {I didn’t want to go through the hassle of getting out the glue gun} a piece of green grosgrain ribbon to either side of collar so I could tie them together. 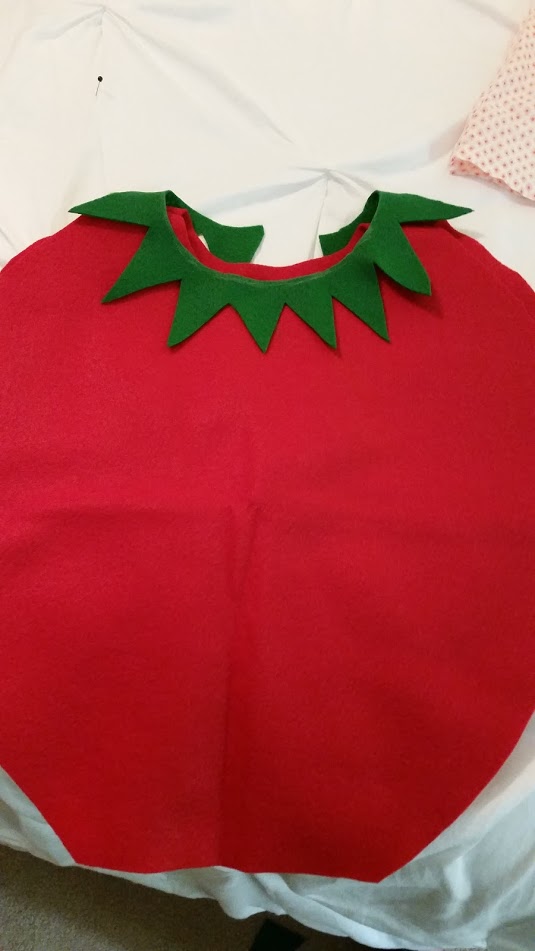 I googled strawberry costumes for an idea for her hat….  I cut out a flat piece of felt, made a little cut in the middle of it for the “stem” to push through and then rolled a small piece of long felt up to look like the stem and pushed it through the hole of the big piece.  I had a spare hair clip {from all those bows I made Eliza Jane!!} that I glued everything on to and then it easily just clipped onto an elastic headband she has. 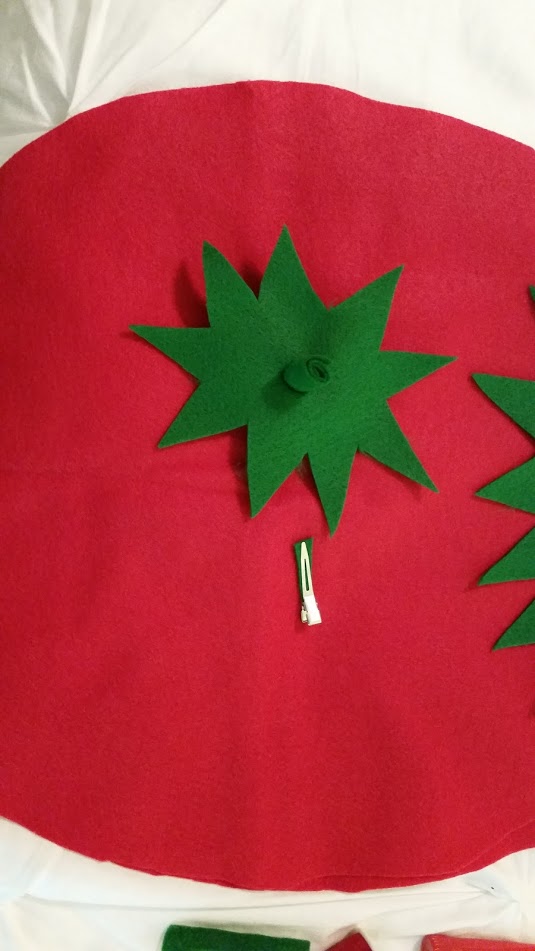 Now that I had the basics of her costume I thought about how I would tie R’s into hers.

I made some mini strawberries. 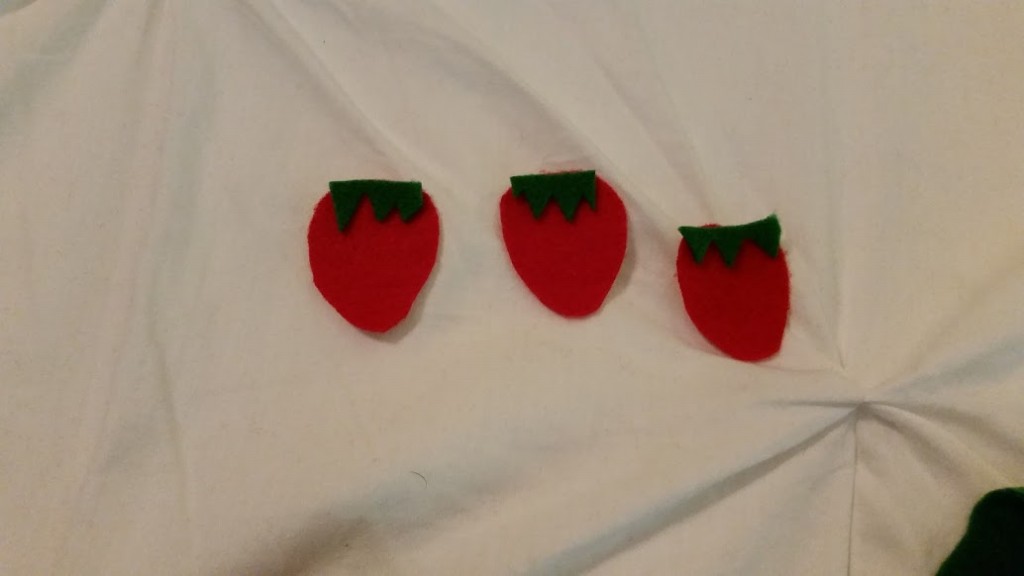 Then, with all my pieces, I got out my Sharpie and drew seeds! 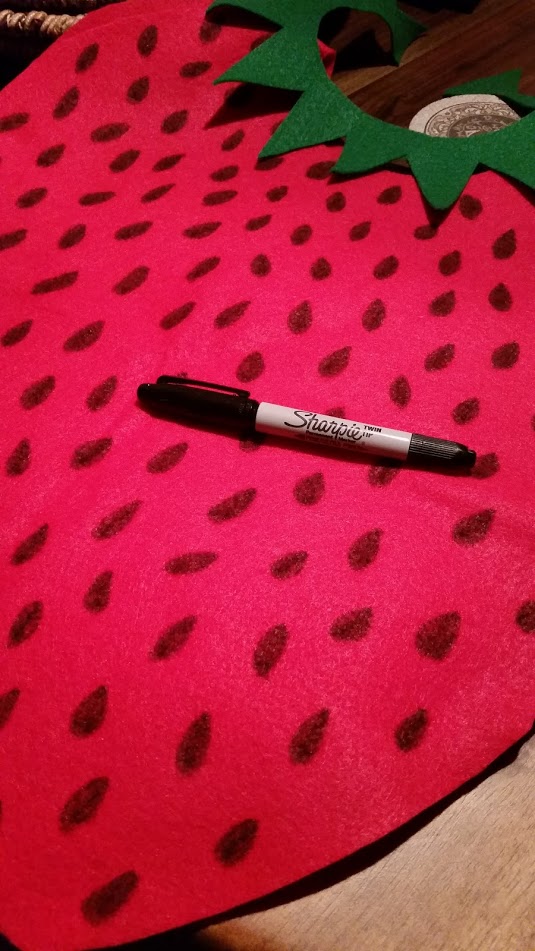 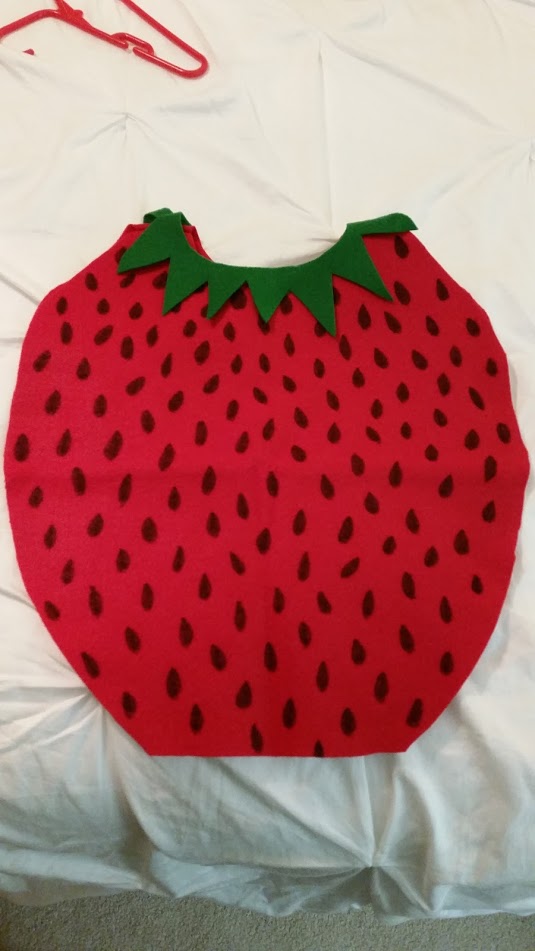 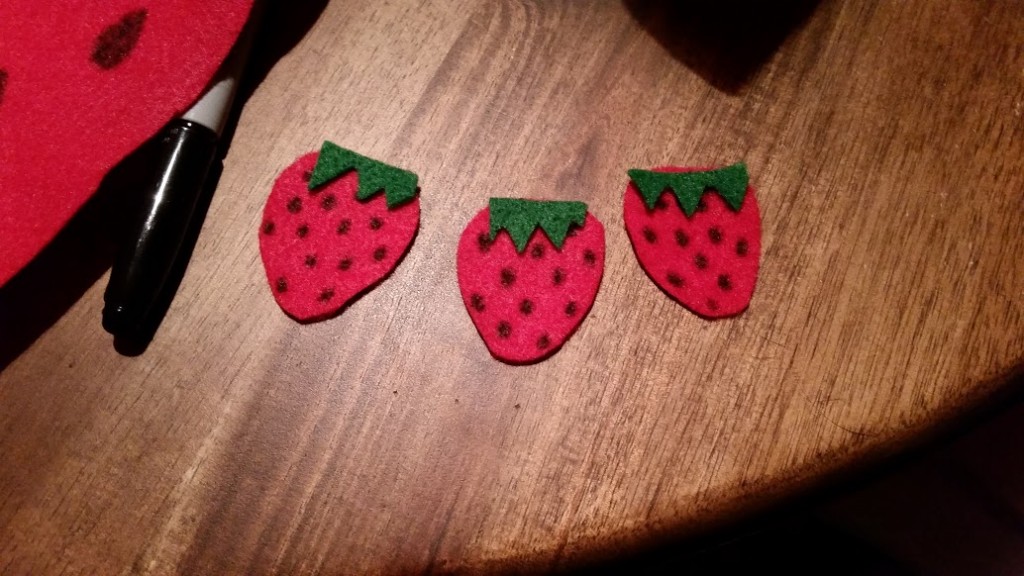 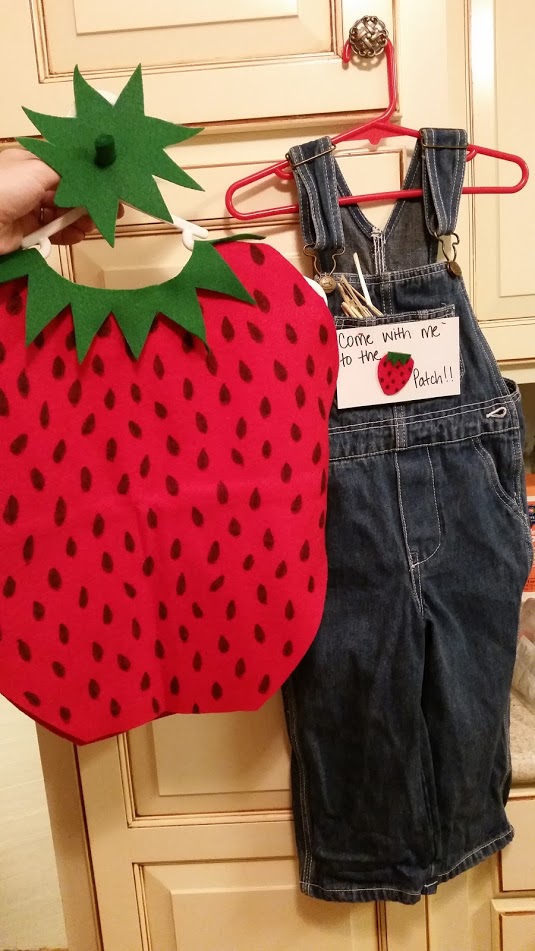 They were so stinking cute!!  We had a Fall Festival, along with neighborhood trick or treating for the businesses around daycare Friday morning so I snapped a few photos before we were off to school. 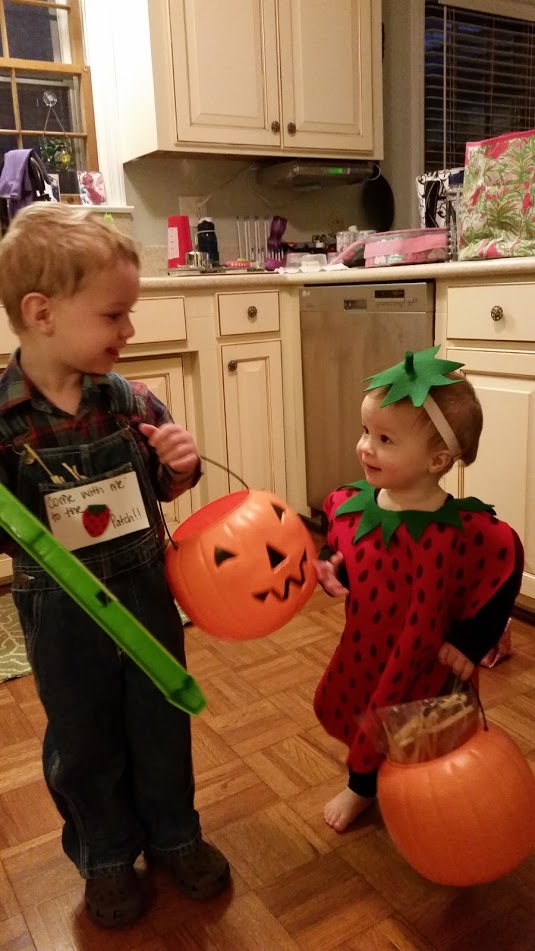 Trying to get a picture of two toddlers looking at you at the same time is nearly impossible!! 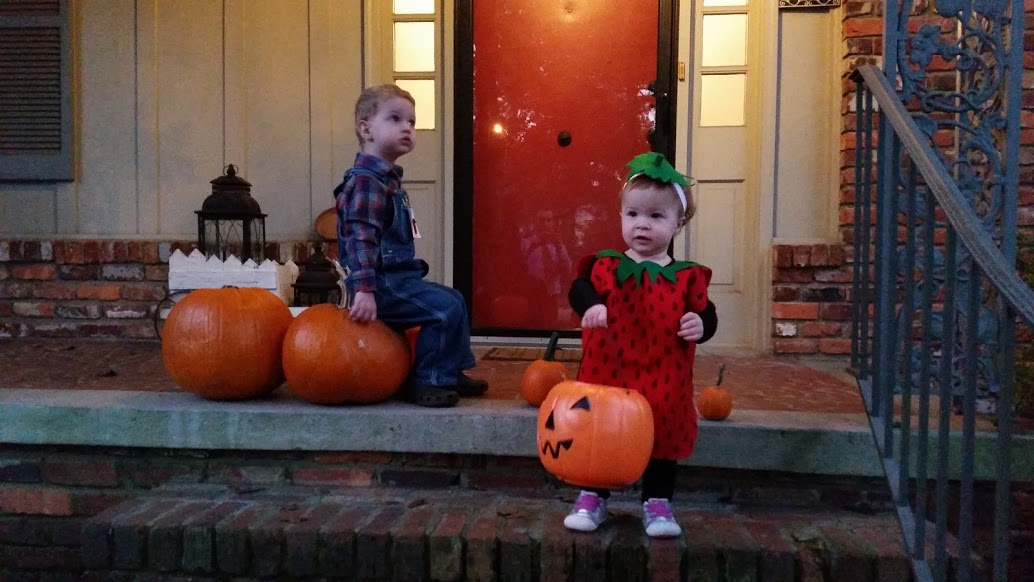 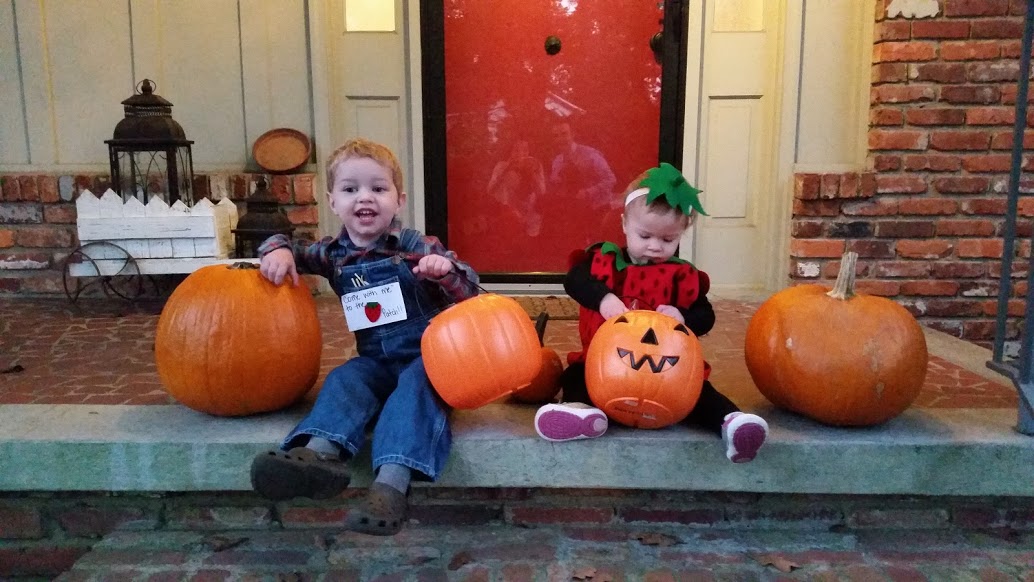 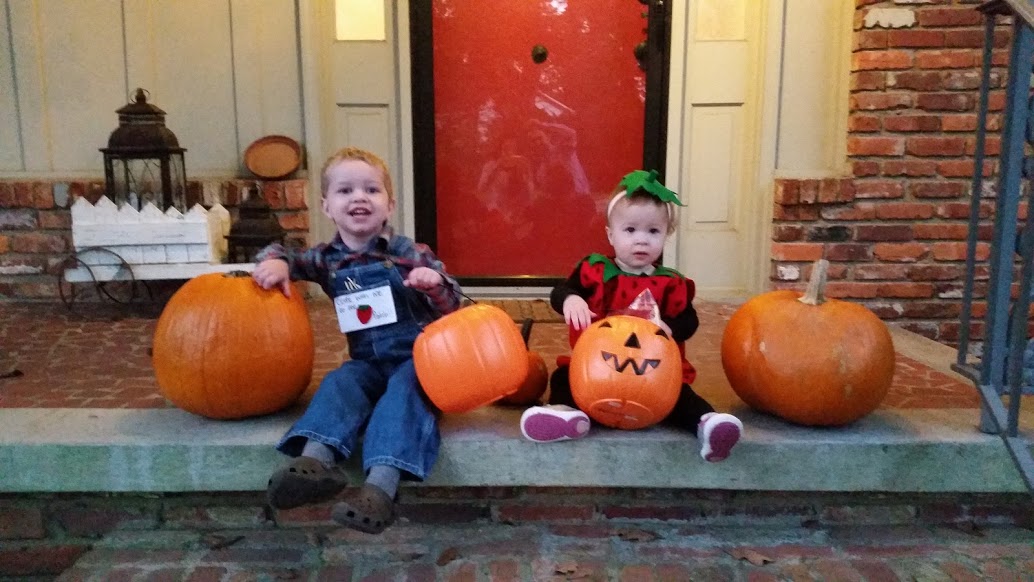 And then on actual Halloween…we had our friends DJ and Dana with Babybel cow, Brynn {in the front of the wagon} and Brian and Tiffany with Graham the Cowbow over to go trick-or-treating with us in our neighborhood. 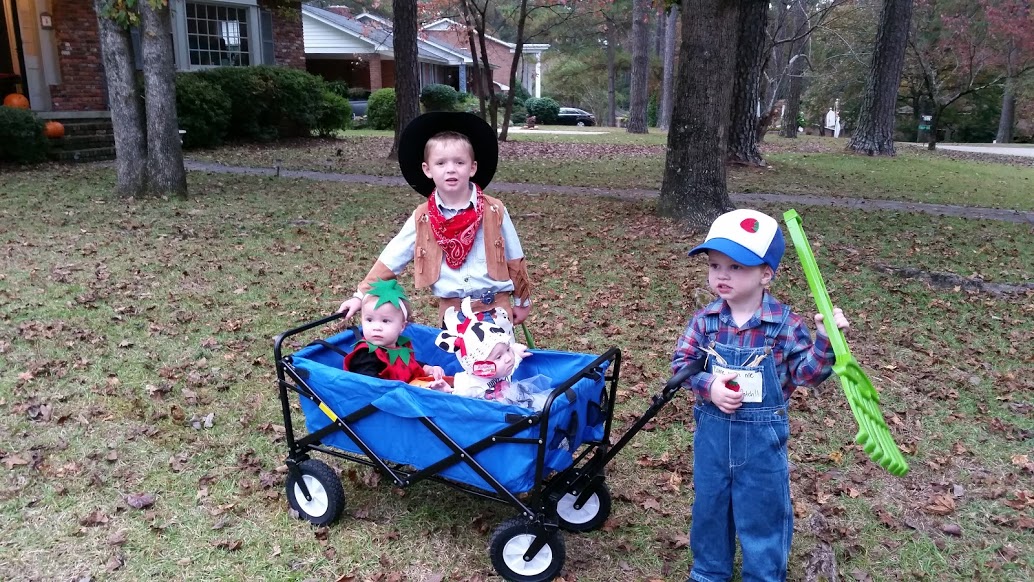 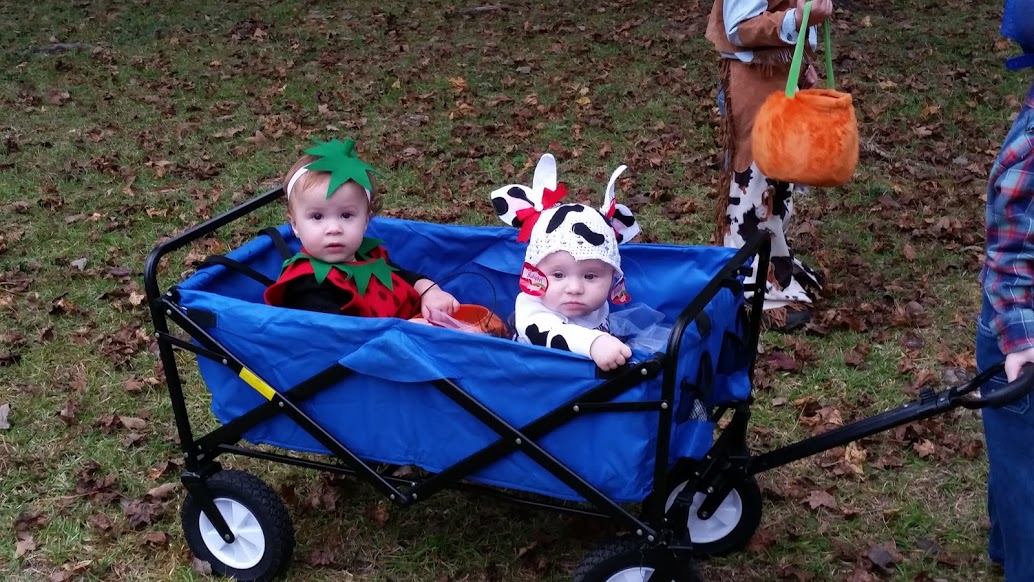 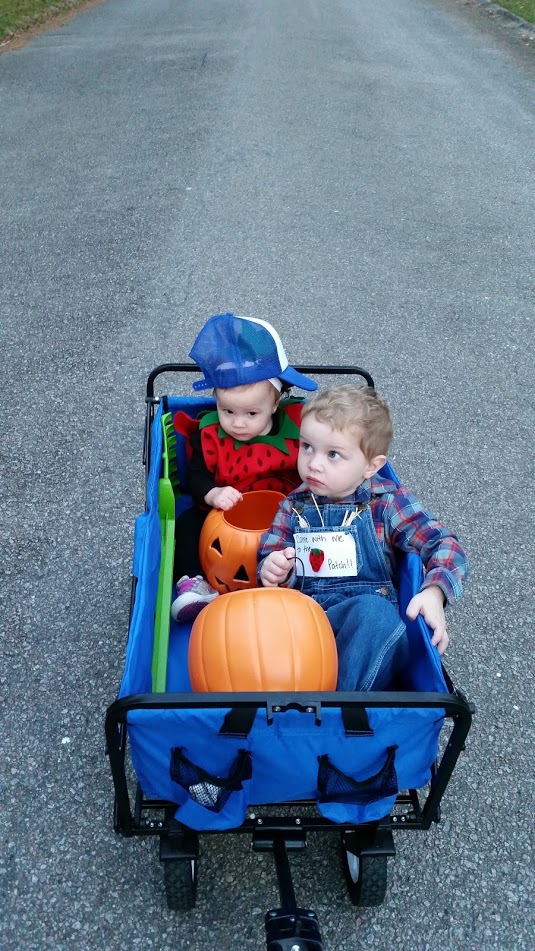 The best picture of the night of our two…hahaha.

I hope you had a great Halloween over the weekend.  Now back to some normalcy around here!