I hope these posts have been a little bit of a blessing to you…and you’ve gotten a glimpse of what you could hear/witness if you were able to go to one of these Abundance conferences.  Of course if you can’t go, there are SO many resources available:  She Reads Truth App (that I’ve gushed about so many times), Proverbs 31 Ministries, LifeWay Resources and so on.

Yesterday’s post was focused on the speakers we heard Friday night.

Today’s post is on the speakers we heard Saturday morning.

Our facilitator was Lisa Harper – who, by the way, is hilarious!  She was our first speaker Saturday morning after we had another “couch conversation” with the SRT gals.

Ms. Harper spoke from Mark 13, focusing in on the times when this was written and our current times.  She referenced the recent shooting in California and spoke that these are what Jesus calls the  “birth pains”.

Our last speaker was Lysa Terkeurst from Proverbs 31 Ministries.  She focused in on 1 Samuel 25:

One of the coolest things available to take advantage of while we were there was this Prayer Wall.  You just filled out a card and posted it on the wall.  When we were dismissed Saturday afternoon, each person got a card and you were asked to pray over that person/situation/whatever for the next 30 days.   I’m praying for total strangers…and trusting that the Lord is at work. 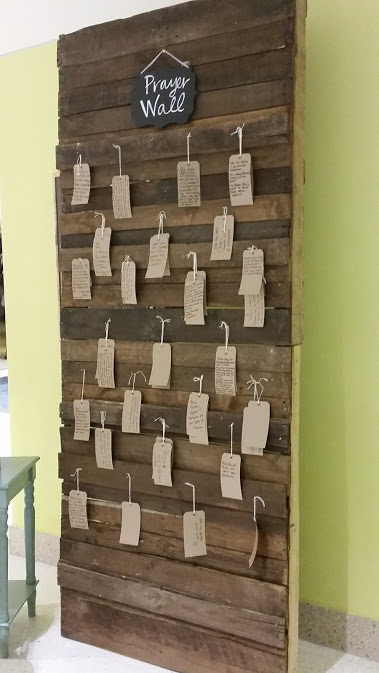 How can I pray for you? Prayer is both a blessing and a gift and there is power in it. It would be an honor to pray for you…