I think I’ve mentioned before that I work with a pretty fantastic group of people.

Well a week or so ago, Breanna came to me and asked if we could do a white elephant party….BYOL {bring your own lunch}…and of course I said yes.  I mean, how could I say no to something so fun, and probably desperately needed {we’re all so swamped at work!}. 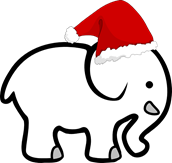 So we had the white elephant party today and it was so much fun!

Breanna has this amazing Christmas tree sheet/curtain panel thing {from IKEA!} that I saw a few weeks ago at her house and then she’d brought to work one day and we never hung it and so then she took it back home.  And well, last night I had an epiphany for how to hang it so I shot her a text and asked her to bring it because I felt like I could figure out a way to hang it.  New uses for paperclips!!!

She also brought some cider in her crockpot that was delicious, even though I thought there were stogies in it {cinnamon sticks get massive over time!}.

So with all the gifts under our “tree” we played white elephant, stealing presents and opening new ones.

Here were the stats:

Stephanie got to open the most gifts.

Jayde got the most random, something that Kristin found in her car, this morning.

Juliette stole the homemade treat from Danielle, even though Danielle almost cried.  But then Juliette shared it with all of us!

Danielle stole the gift that started off being coveted by Breanna, until Breanna saw the rice cooker and then she could care less about the package of stick-on mustaches!

No one touched David’s cross because he said he was going to give it to his wife, and well, who can steal something after that?

And I.   Well, I ended up with a Kenny G CD that Santa may put in someone’s stocking for Christmas.  Just you wait and see.

I love my people…they are super fantastic and we have such fun together!