I’ve shared with y’all a few times now about our struggle with getting a certain three-year-old to eat his fruits and vegetables.

It all came to a head last week when he was given a challenge…a goal of sorts.

You see, the weekend we went to Amelia, my nephew, Reynolds’ cousin, had a Spider-Man watch.  He let R wear that watch one night and R was hooked.  He had to have one of his own.  I asked my sister-in-law where she got it.

Then Andrew and I devised a plan.

“Reynolds, Mommy is going to get you a Spider-Man watch.  But in order for you to have it, you have to eat all your fruits and vegetables every day at school this week.”  I even took it a step further and used it on him at supper time.

I told his teachers about the challenge and they were incredibly supportive and helpful.  I think it was on Wednesday that R had corn to eat and though he struggled, one kernel per spoon-bite, he made it with the help of his teachers!  Mrs. Carolyn told me that she encouraged him each day and on the day with the corn, she looked at him and said, “Come on, buddy. We can’t sit here all day while you eat one kernel of corn at a time!”  So she fed him and he ate.

I marked off his paper of how he was eating each day.

He even told on himself one day, saying on the way home from school: “Mommy, I didn’t eat all my watermelon today!”

I was saddened, afraid that the challenge would be over…we’d have to start fresh the next week.

But when we got to school the next day, as I told the teacher about what he said, she shook her head and said, “Reynolds! You told on yourself!  You ate that watermelon, except three bites!”.   So I asked her if he ate enough to count for a “yes” or if I had to give him a “no” for that day.  She told me, “Oh, baby, he ate almost all that watermelon.  You gotta give him a yes.”  So I did.

By Friday we were all pumped.

I had the Spider-Man watch in my purse and reminded him once again as I left him in his room at school, that all he had to do was eat all his fruits and veggies and the watch would be his that afternoon.

I picked him up and he proclaimed, “Momma!  I ate ALL my fruits and begtebles today!  Where’s my Spider-Man watch?” 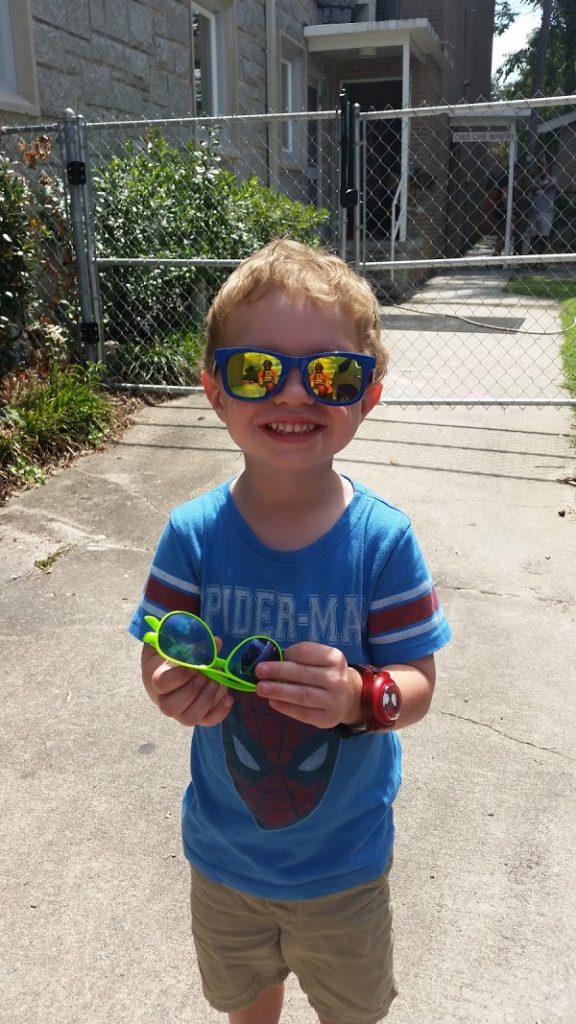 And yes, of course he had to wear his Spider-Man shirt too!!  {There’s a short little video from Friday on my Instagram if you want to see him in all his excitement!}

He was so proud…and so were we.

Andrew and I talked about it Friday night and said that he really enjoyed how we set a goal for him and helped him attain it.  He had small victories every day that he ate all the fruits and vegetables and at the end, his goal of getting a new Spider-Man watch was achieved!

So far, he’s still trying new veggies and eating the ones that he’s given.  Hopefully this will last another week or two…then we’ll have to find a new goal for him!

Do you have a picky or stubborn eater?  What are your tried and true methods for getting him/her to 1. try new things or 2. just eat the food?