Twice this year she’s hijacked us. And this time, she hijacked herself.

It was a lovely Monday afternoon. Just the yesterday in fact. We were looking at a house for sale and first Emory had a dirty diaper…and as fate would have it I had ONE wipe in his bag. ONE. Andrew and I raided both our glove compartments for any and all napkins to help in our time of need. I was more thankful for Subway, Bojangles and Dunkin’ Donuts than ever before…

As I was cleaning up the poor baby who was extremely unhappy about his current situation, Andrew was aiding me as best he could. And as I recall it, I saw out of the corner of my eye, the other door closing shut. Silence was broken by what I have called the ‘Mariah Carey scream’. It’s this high-pitched shrill of a sound, that if you aren’t in a safe enough distance away, you could lose your hearing entirely.

Andrew was trying to talk to the screaming child and in my “Ican’tbelievethisishappeningrightnow” annoyed, moment self, I said, “It’s broken, just get her in the car.”

Of course it’s broken. It can’t NOT be broken. I have never seen a finger look like THAT before.

Bless my sweet husband. He got her in the back of the van despite the screaming and crying. And wouldn’t you know. She didn’t care one bit about her jacked-up finger. She was screaming now at the potential that she would miss gymnastics.

Punch me in the face, would you?

“My want to go to ‘nastics!!!” she was hollering from the back seat as tears poured out of her eyeballs.

Poor kid. Originally, I was going to be a single mom for the night so I had decided to be brave and take all three to gymnastics. I even called ahead Monday afternoon and asked if Reynolds could participate in Eliza Jane’s class and had gotten that okay’d.  Now…  Now all their dreams of doing flips and swinging and rolling around had been dashed.

“What were y’all doing? Who closed the door?” these were the senseless questions I was asking them of course. Reynolds stared at me like I had 10 heads. Mum was the word. No one was fessing up to this fiasco.

I called the doctor’s office and told them what happened…”What do I do? Where do I take her?” I asked.  They told me to take her to the “Black and Blue clinic”.  And of course as I was retelling this to Andrew his response was, “oh yeah, I’ve been there many times.” Y’all recall that I have an accident insurance policy 1. because of him and 2. because of Reynolds, who is much like his father. And now, apparently Eliza Jane is as well. So far now…2 out of 3 children are following in their father’s footsteps. I am doomed.

Anyway, back to the story. We got to the clinic and by then the screaming and crying had stopped…but she was still sniffling about missing gymnastics. Logic was in no way a part of any of our conversation, obviously. Andrew was trying to explain to her that she couldn’t tumble and do flips if her finger was hurt. “My not want to go to the doctor! My want to go to ‘nastics!” She was adamant.

Bless it all, y’all.

Long story cut short…I called ‘nastics and told them we weren’t going to make it after all, but thanks for letting us know that Reynolds could participate in her class in the future.
Emory and I left the clinic to get home and cook the supper my tummy was rumbling for and as I finished up my dinner I got the text that everything was okay.
“She didn’t even cry when they did the x-rays.” Andrew’s text came thru and I shook my head thinking, “of course she didn’t.”

No major damage, just a cut on the backside of the joint that we are trying to keep a bandage on, to be sure it doesn’t get infected.

What a Monday. Here’s to the rest of the week and hoping that there are no more hijackings in our immediate future. And yes, I hope I didn’t just jinx myself.

Meanwhile…here she is in all her silly from today. 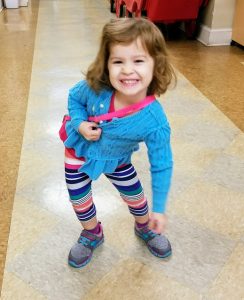 Have a great night!