This is probably one of the funniest stories I have of late.  And it’s a real, true life story that happened just two days ago.

You see, we’re at the tail end of this powder room renovation in our downstairs area.  {All because of that dang flood we had last October}  And well, well….I’ll just tell you the story.

So Sunday afternoon Andrew says to me he needs to go under the house to turn the water back on.  The water to the powder room – the sink, the toilet – you know, the main parts.  And he tells me to have my cell phone on so that he can call me when he turns it on so I can tell him if there are any leaks.

Meanwhile, this seems to be taking him forever so I called my mom and she, Eliza Jane and I had a little chat.

Then, when I realized I was supposed to be waiting for Andrew’s call I got off with Grammy and walked towards the powder room.

Once in, I knocked on the floor and asked how things were going down under.

Slight change of plans.  Andrew had forgotten he’d already done some plumbing work in preparation for the day when we actually did get to turn said water back on so he was redoing part of his current plan.

Meanwhile, both children have come into the bathroom and Reynolds is now banging on the floor yelling, “BABE!  BABE! What you doing down there?!”, while I’m telling him that he can’t call his daddy “BABE!”, only I can.  He tells me I am wrong and I laugh IN his face.

“Hey babe, I’m going to turn it on now, let me know if it leaks!” or something like that came forth from the floor.

I didn’t have the valve completely turned off, so water gurggeled up.  I yelled!  Andrew yelled back to turn it all the way to the right.

I turned, it shut off.  At least from what I could tell.

At this point, Reynolds has his step ladder and is midway of knocking over Eliza Jane so I holler at him to put down the ladder before he knocks over his sister.

Meanwhile, in the next 10 seconds I get a hair-brained idea to check the new pocket door and it’s lock.

Hmmm…so if I were my guest, I would pop out his little latch…pull the door to, {Eliza Jane hops into the bathroom with me} and then turn this little lock like THIS.

I looked over to the valve at the toilet….water is dripping.

I sound like I’m on the verge of manic.

Reynolds is also yelling from the other side of the door.

Finally from under the house, Andrew pipes up, “WHAT?!  You’re stuck?”

“YES, TURN THE WATER OFF, IT’S LEAKING!  AND THE LOCK IS JAMMED; ELIZA JANE AND I ARE STUCK IN THE BATHROOM!!!!”

I’m playing with the lock, trying to get it to turn back the way it’s supposed to and it won’t turn.  It keeps re-locking itself without actually unlocking.

I started knocking on the door.  Reynolds knocked back “LET ME OUT!!!” he yelled!

“You’re not IN!!!” I yelled back at him, laughing almost hysterically.  He keeps knocking and yelling to let him out!

Eliza Jane is just playing with the new toilet paper holder I’d purchased so she was fine.

I laughed even harder.  I’m locked IN the bathroom.  The ONLY bathroom on the 1st floor of our home.  The gate is locked to the upstairs.  If/when I do get out of this beautiful room, I’m going to have a puddle of PEE to clean up!!!!!!!!!

I couldn’t help but laugh.  This was hilarious!

My husband is UNDER our house.  The valve is leaking water thru my new wall/wallpaper, down the new baseboards and over the new tile.  I am locked in a bathroom with a toddler that has no idea of what is happening, while the other one is on the other side yelling to let HIM out, and that he has to peep, when there is no usable toilet anywhere at his access.  Thiscannotbehappening.

Andrew was no longer answering my yells.  He’s dead.  He hit his head on some floor joist and he’s knocked himself out or he was bitten by a snake and he’s lying dead on the cold ground under our house.

I shimmied my toe under the door and lifted in the most awkward way.  The door became loosened and it opened just as the door to the garage opened and Andrew appeared.

“How was I supposed to hear THAT when you were screaming about being locked in the bathroom!  I was trying to get out so I could save your life!!!!”

Who wants to come over?

I promise if you do, you won’t get stuck in the bathroom!

That has been fixed {just a little door filing so the latch fits a little better – not so tightly} and the water is no longer leaking.  My wallpaper, base boards and tile are just as beautiful as before this little bit of excitement!

Stay tuned…this weekend I’m hoping to do a full reveal of the new powder room and it is SO PRETTY!!! 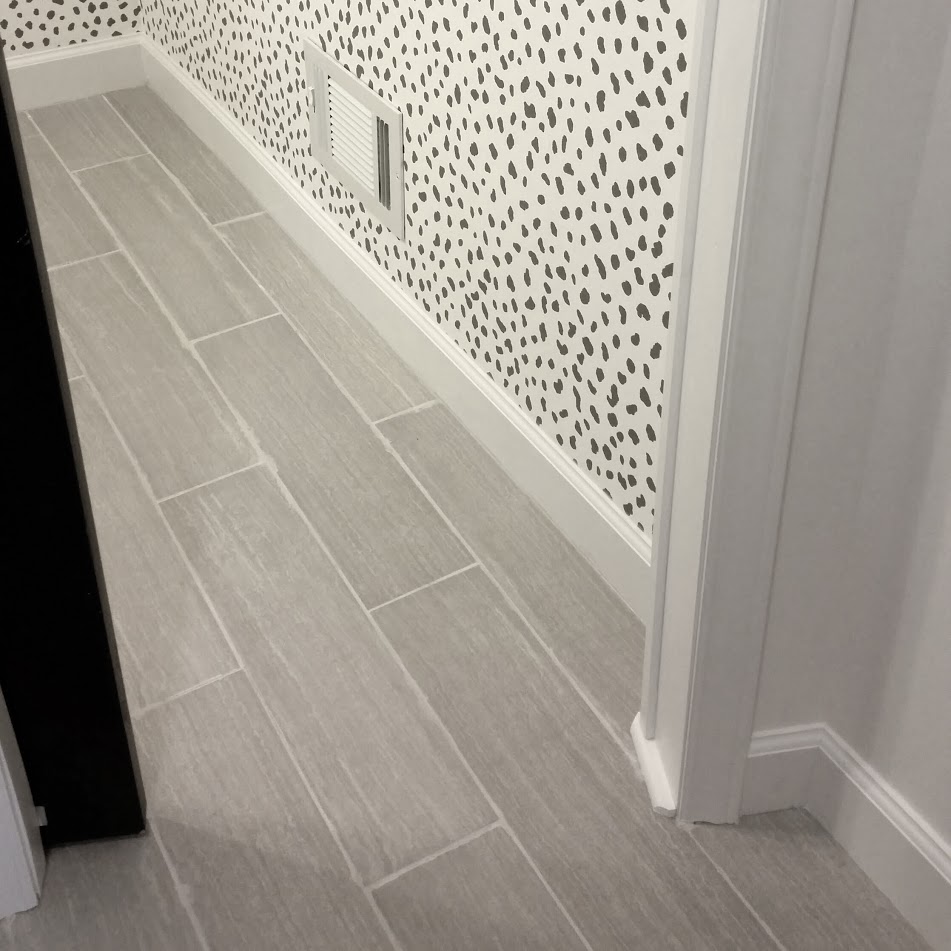 Random thought/small confession: I took the kids into Publix on the way home tonight solely so R could get a cookie.  He was a really good boy for me this afternoon and that was his reward.  Has anyone else ever done this? 🙂