Reynolds has been sleeping in his “big boy bed” for three months now.  Man, how time flies!

When I initially posted on Instagram about the switch to the bed, a friend commented, “please write a post on this transition…I’m not even sure where to start”…

Not that we even had a clue, but here’s what we did.

Put him in it.

No, really.  So I spent one Saturday, back before Eliza Jane came along, getting his and our guest bedroom ready.  This is how his looked: 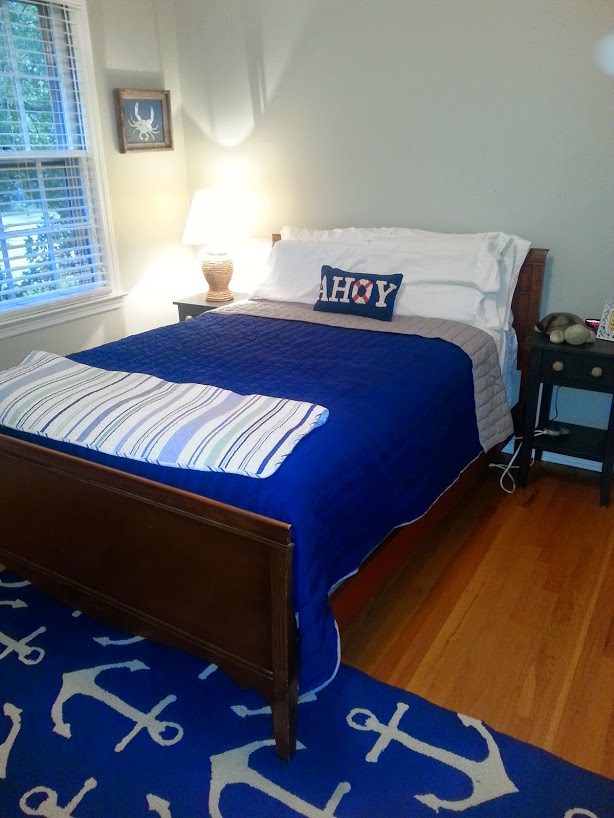 Then I realized I had forgotten to put up his verse board. 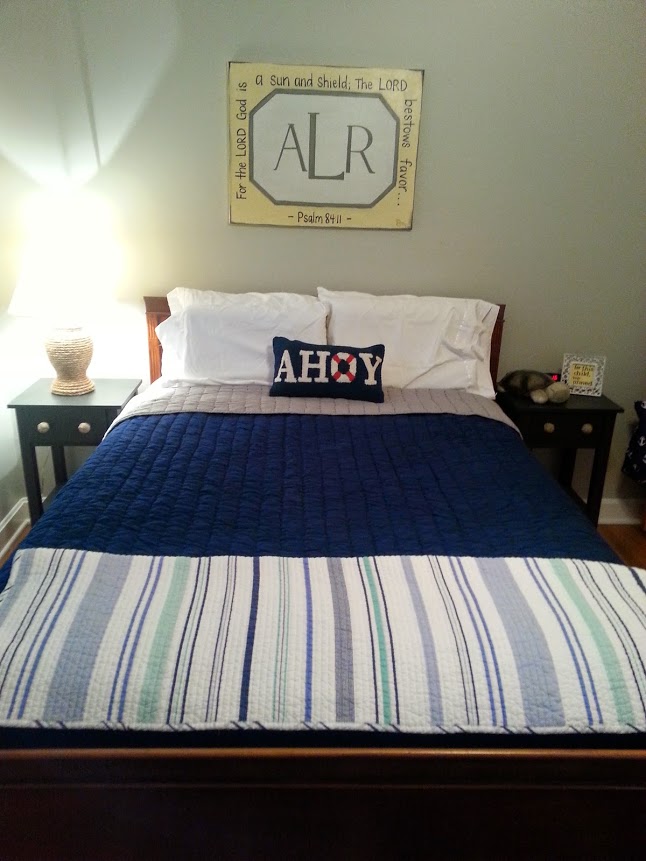 Then I realized, who am I kidding.  This kid is a KID.  He doesn’t care about the rope lamp (that I created FOR him), the fun AHOY pillow (from One King’s Lane) or the verse board (later he would rip it off the wall).  {Oh, and the fun crab art in the first picture – both came down off the walls and are presently waiting in the closet to be re-hung, at a later date when he is more mature and less likely to destroy them.}

We ended up rearranging the room so that one side of the bed is actually against the wall – to prevent falls from at least one side of the bed.  {Have I mentioned before that this one is a bit clumsy? :)}  The other side and the end of the bed (let’s face it, that foot board wasn’t going to keep anything contained) have rails to prevent, as much as possible, anyone from falling overboard.  {I know as soon as I write this I will be jinxed!!}  So far….so good….

The first day R slept in his big boy bed was for his afternoon nap on a Sunday.  He slept…like a baby… 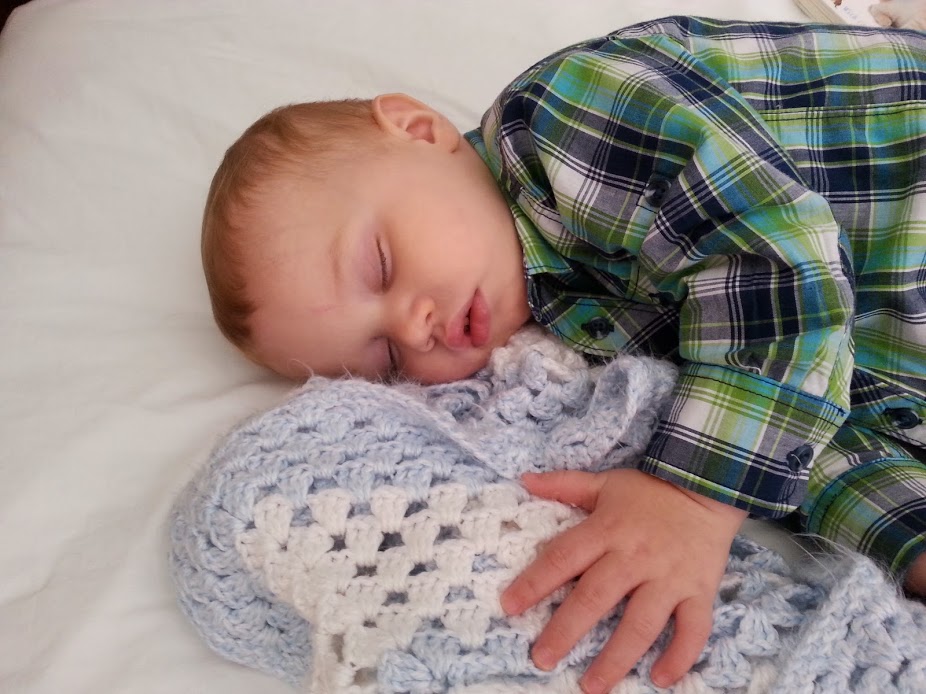 {Don’t you just want to curl up beside him?!}

The really silly decision was that his first night, that night, was also the night before I came back to work full time from maternity leave.  Not quite sure what the thought process there was, or if there was one…but we all managed to survive.  I did end up with him in the early hours of the morning and when my alarm went off at 4:45am that wonderful day.

All in all, it’s not been a difficult transition for us.  I’m not sure if it’s because R just sort of rolls with the punches, most days or what.  We occasionally have issues with him trying to rip the blinds off the window (cords are out of reach) and the inevitable shoving of books between the bed and the wall so that they make an awfully loud >Crash!< sound when they hit the hardwood floors.  And from time to time he does throw Elmo or Giraffe {sounds more like “rash” when he says it} overboard on the other side and then gets upset about it.  {Which I don’t even understand because HE was the one who threw it.  If you wanted Elmo so badly, why did you throw him across the room?}  Along with the rail at the end of the bed, we also have a few pillows stacked, mainly to deter him from even trying to go off the end.  They’re also there for us, when we (correction, Andrew) ends up in bed with him around 2:30am….like this past Tuesday night.  {Have I mentioned that my husband is amazing?  Because he is.}

Really, all he needs is his blanket, a few books, Elmo and “Rash” and a light-up turtle he has.  Whichever one of us puts him to bed at night (we try to rotate between kids so they don’t get used to just one of us), we try to read a book or two (pending the time) in the bed with him and then turn out the light.  Story time (or tickle-time?) begins.  I often ask him about his day at school and we go through all the names of his friends and teachers.  {I recorded him the other night…it’s so ridiculously sweet to hear him say the names of his friends!!}  When it’s for-real night-night time, he does usually get a little upset, but by the time I walk out of the room and get down the hall, he’s stopped crying.  Sometimes he’ll talk to himself a little longer and other times he goes right to sleep.

For us, we didn’t make a huge deal of it…we just did it.  He seems to like his room and his bed, especially since he can say to me, “Momma, bed.” and he knows I can get in with him.  It’s pretty special snuggle time for me, too.

If you’ve got a great idea on the bed transition topic, please leave a comment below to those who may be in the beginning or middle of this great change!