You know, I’d heard this was going to happen earlier in the week…one morning while watching the “Today” show.  Something like deals as good as “Black Friday”.

But that’s not what this blog post is about.

I’m here to talk to you about Christmas being Advent season and Advent being the season that leads  up to Christmas.  And well, all that taking place for me right now, in July.  My own Christmas in July.   Let the snow come on down!!

So, Christmas in July.

I was laying in bed one night.  One of those nights where you’re just too tired from everything.  And you just want to go to sleep.  Maybe I was a little sad that night.

I opened up my She Reads Truth app on my phone {if you don’t have it, get it.  just do it.} and started sorting through the various studies.  I knew I needed something that would aide me in praising.  One thing I have learned over my 30+ years, is that in order to get out of your funk, you’ve got to switch your focus from being >ME< centered…to someone else.  And who better to focus on than our Creator.  So I needed praise to keep my eyes fixed on Him.

There it was.  In black and white, bare trees and snow. 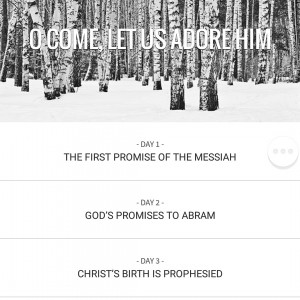 I texted a friend who I knew was also looking for a study and asked if she wanted to read it along with me and she said yes.  {Everyone needs a little accountability now and then!}

So here we are…mid July {where has the time even gone?!}, reading about Jesus’ coming.  It’s pretty incredible.  And it’s not surrounded by all the pomp and circumstance of Christmas – not that it’s not grand and doesn’t deserve it, because it DOES.  But because I needed it in the quiet.  Not with the rushes and the discounts and the sales and the lists {oh the lists of Christmas!} and everything else that surrounds December that can so easily distract us from what REALLY matters.

The quiet of being able to appreciate it.  And praise Him.  For the miracle.  And the miracles that we see every day.

So.  Here’s your question, if there was one thing that you could praise Him for today….what would it be?

And if you’re looking for a Christmas in July discount…look no further than Lindsay Letters.   She has a really fantastic sale going on right now, so go get you some home goodies to get ready for the real Advent season!