Warning to any men possibly reading this post: My husband has yet again, raised the bar for you.  🙂

Yesterday morning as I prepared for my day, I pressed my black lace dress that I’d recently purchased from Ann Taylor.  A dress that I’d purchased specifically for an event we were to attend that night.

My day was planned…chock full of work stuff and then a hair appointment {because my roots were due for some color}.

Things were going along just as planned.

First I saw “..reminder, this is BLACK TIE.” and then I saw the name of the man being honored…the President of USC.

“Holy Moley.” I thought.  Panic swept over me.  I texted Andrew, “What am I going to wear tonight?!”

He proceeded to tell me that the dress I had was “good”.

I sought the help of a girlfriend at work.  She entered the panic room with me.  We shared in the panicking.

Of course we were laughing, this WAS hilarious after all.

I called Carlee at Bella Bridesmaids and told her of my crisis.  She laughed along with me and said, “You have NO idea how often this happens!!!”  Husbands who neglect/forget to tell their wives about the dress code…

She apologized that she didn’t have anything in my size and referred me to Coplon’s.

Coplon’s is a fabulously fancy ladies shop, that was completely destroyed last October during the flood.  But, they have a small shop currently open just across the street from it’s true location, near our home.

I called and spoke to Judy.  She too, laughed at my predicament and told me to get in the car and head over, that she would be looking for some dresses in the meantime.

I called Andrew, he was in class.

In my mind I was going round and round about the dress I had and whether or not it truly would be appropriate for “black tie”.  I felt like I could pull it off, but then to honor Dr. Pastides – a man that my husband greatly respects, I wanted to make Andrew proud {I am his arm candy 😉 bahahaha}.

So I got to Coplon’s and Judy helped me pick out a couple of short dresses and a gown or two.

When I first saw it I was totally unsure.  Pale pink.  Silver sequins all over.  Not entirely “me”, if you know what I mean. Still, it was pretty.

I tried it on.

It fit great and I actually liked it.

I walked out into the shop and was told that it looked fantastic.

I walked back into the fitting room, took a picture and shot it to Andrew and a friend…

Andrew called, “Where are you?”

All he heard were dollar signs.

We talked about the dress I had on, the event itself, etc.

He pulled up pictures on FaceBook from the 2014 event to see what folks were wearing and assured me over and over that the black lace dress I’d already purchased was “perfect”.

I was still unsure.

I was also unsure about the price tag on said dress I had on.

I asked sweet Judy to hold the dress for me.  She agreed to do so.

Andrew called, “If you get it, just make sure you wear it more than once.”

Girls…we all know how that goes, don’t we?!  We buy something we think we’re going to use/wear a million times…it gets used/worn once, maybe twice and then gets lost among everything else.

I heard him loud and clear.

I had already texted a girl that works with Andrew, about the event…so I sent her the picture of me in the dress.

Andrew later told me that she was in his office telling him to his face what she was texting me.  I can only imagine how hilarious that was.

I went back to work swirling in my mind what I was going to do.

Our event was to start at 6:30 with a cocktail hour.

I was fully dressed in my black lace dress, makeup and hair done.  Standing over the stove tearing apart chicken that I had baked, and cooking noodles for some alfredo pasta for the kids.

Grandma and Booba {Andrew’s parents} were there…our babysitters for the night.

But the husband and kids weren’t home yet.

Andrew came in shortly thereafter with Eliza Jane…and while I chatted with her and the grands, still preparing food at the stove, I heard a sweet voice behind me. 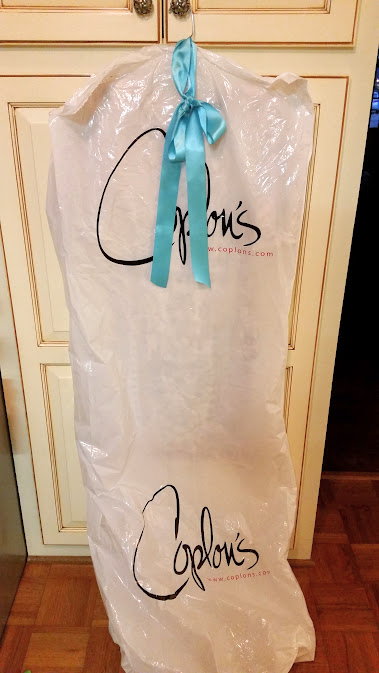 I looked at Andrew, my jaw on the floor…”Are you serious?  You bought that dress?!”

Dazed and confused by this man’s actions….

“Do you want me to wear that dress?”

My mind racing at the fact that I would have to literally take off everything I had on in order to wear this one.   We were surely going to be late if I had to do all of that…

Andrew in all his amazing husbandly attributes said “I think you look beautiful just like you are….”

With all the mixed signals that I’d just gotten, I kept on the black lace dress, unsure really of what all this meant.

He rattled off a few reasons of why I deserved it…and mentioned that he also felt like he needed “brownie points” going into this weekend {where he’s spending two days wine-tasting for a class he’s taking}.

I rolled my eyes or shook my head at all of this, thinking that I didn’t deserve it and he certainly doesn’t need brownie points.

I posted a picture of us at our event, me in my black lace dress. 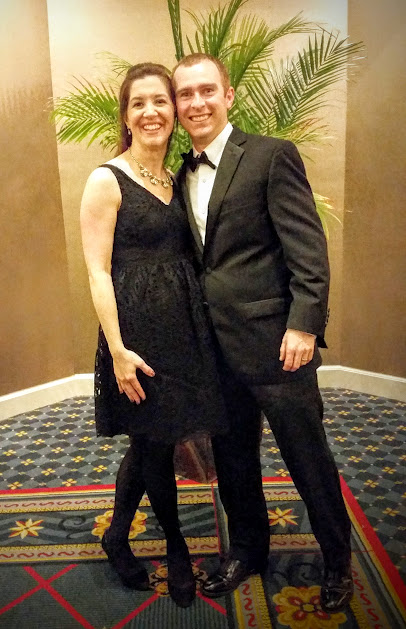 Andrew’s co-worker sent him a text, “What happened?!”  She fully expected to see me in the dress.

The dress was beautiful.

Andrew is amazing to have gone and purchased it for me, WITH our two kids at their witching hour…

But I took it back.

I wrestled with the cost and if/when I would wear it.  I just couldn’t justify keeping it.

The ladies at Coplon’s were wonderful to me when I returned it this afternoon.  One lady was there yesterday afternoon and told me how thoughtful Andrew was to have gone and purchased the dress for me.  She told me how sweet our kids had been {I told Andrew he must have been crazy to take them in there!!}.  And that Andrew had taken a picture of them sitting on the counter together… 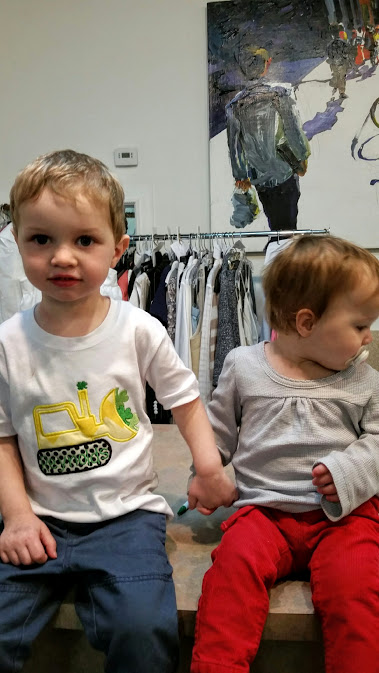 I’m so proud of and thankful to have Andrew.  He completely blew me away yesterday evening.  I am not deserving of him and what he does for me every day.

Here’s the one photo I have of me in the beautiful dress.  When I sent it to Andrew, his comment was, “Why do you look so surprised?!”

I’d love to hear your thoughts…should I have kept it?