I am so excited about the two projects I worked on (and finished!!) this weekend.  The first one I’m sharing is pretty exciting for me, mainly because it’s another attempt at being crafty and succeeding!

Andrew and I have been talking recently about measuring Reynolds’ height or growth as he gets older (at his 18 mo check last week he was 34 inches tall!!).  We talked about using the traditional inside of a door frame, but then, what if we moved?  Would we cut that out and take it with us?  Doubtful, though we did really consider it….  I looked at some cute options online to see if there was a “generic” version that we could use for both kids and then I found some really cute growth charts on Etsy.  And most of them, honestly, I thought, I could make that.  What’s so hard about this?  And why on earth is it a hundred bucks?!

That’s right.  I decided to make my own.

Saturday morning I showed Andrew my plan and confirmed that while the kid(s) were down for their naps, I would go to Lowe’s and get the few materials I needed.

In the backyard, with our (poor, sad and falling apart) picnic table as my workstation, I went to work.

I quickly stained my piece of wood with Minwax’s Provincial 211 (the same stain we recently had our floors re-stained with). 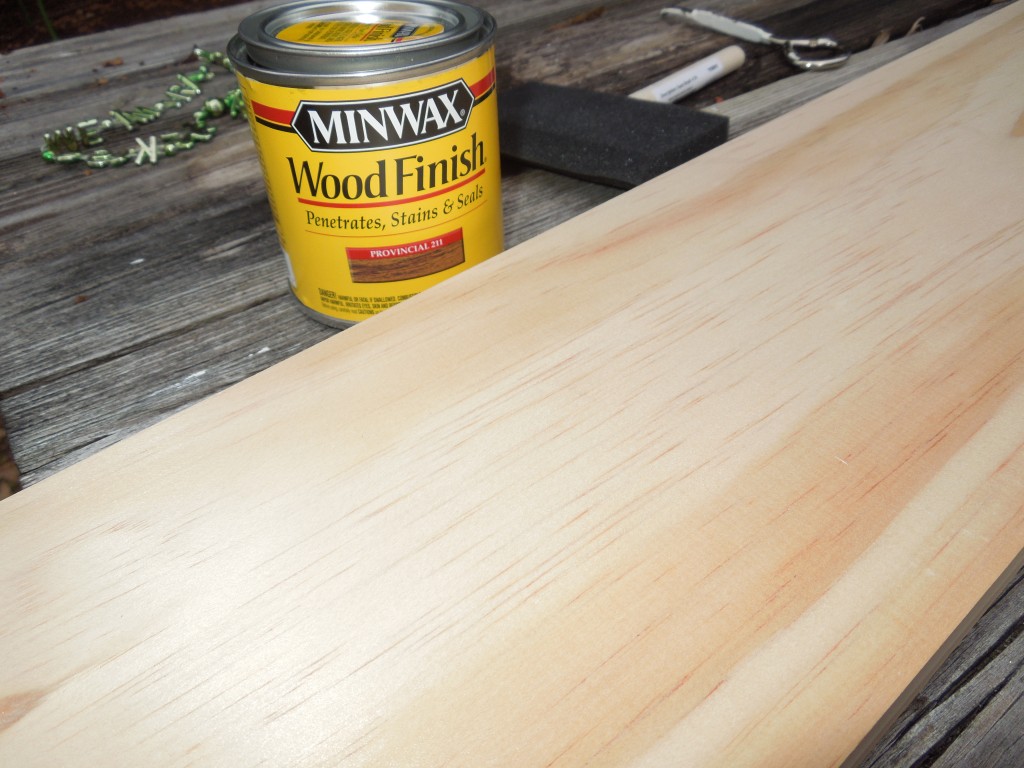 While it dried, I went on a search for the yard stick that Andrew told me we had.  He said, “it’s in the garage, standing up next to the tents.”  Riiiight.  I finally found it, grabbed a Sharpie and a small level and went back outside.  I made my marks every half-inch, with my inch marks about twice as long. 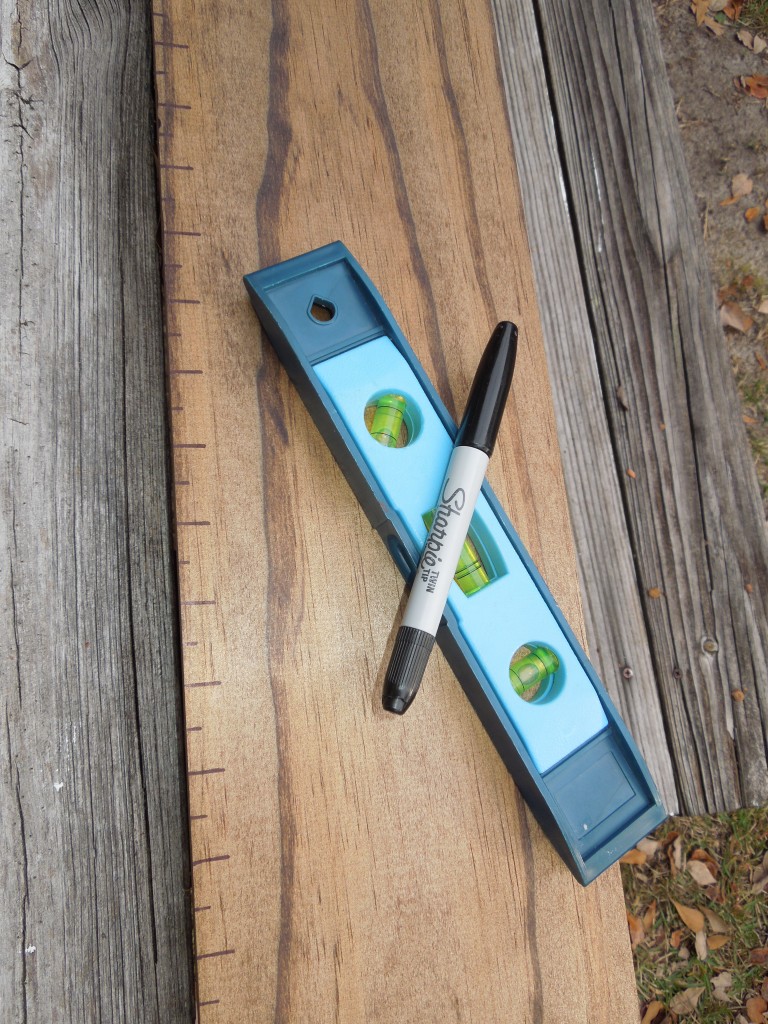 Sunday morning, while everyone else was still asleep, I finished my growth chart.  To be sure I didn’t mess up this project, I got my tape measure out once again and laid out the numbers.  Before drilling the numbers into place, I used the Sharpie once again, extending my foot marks even longer than they were so that they would stand out just a little more. 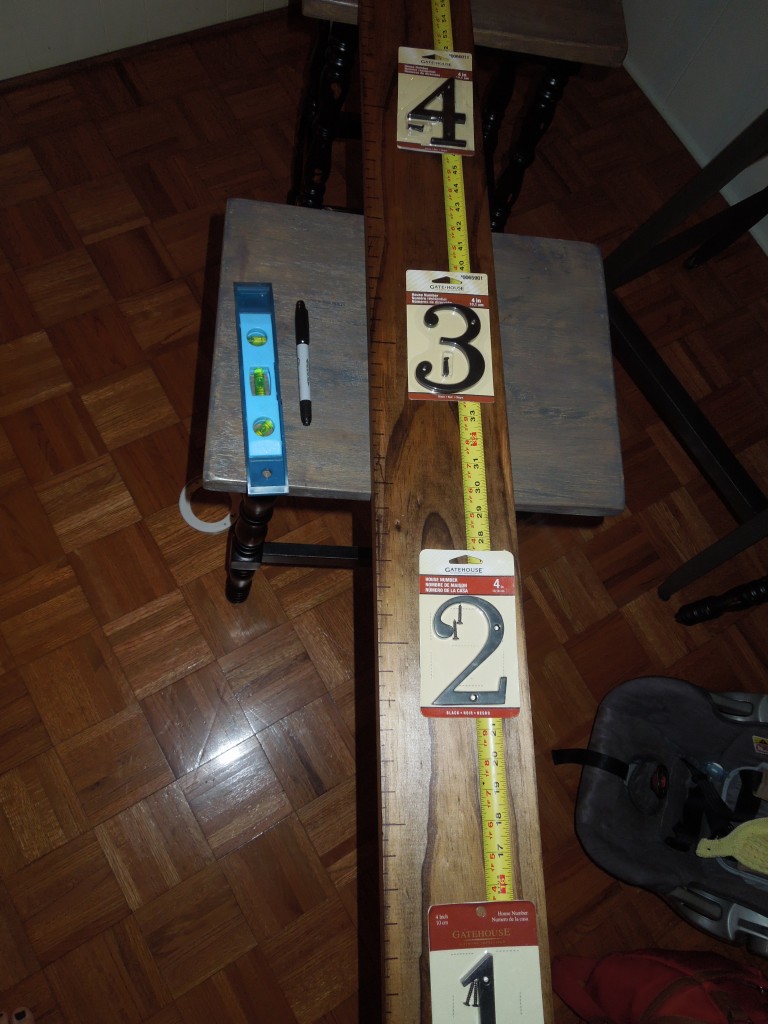 Liking the look of the numbers I’d purchased, I started unpacking and drilling them into place. 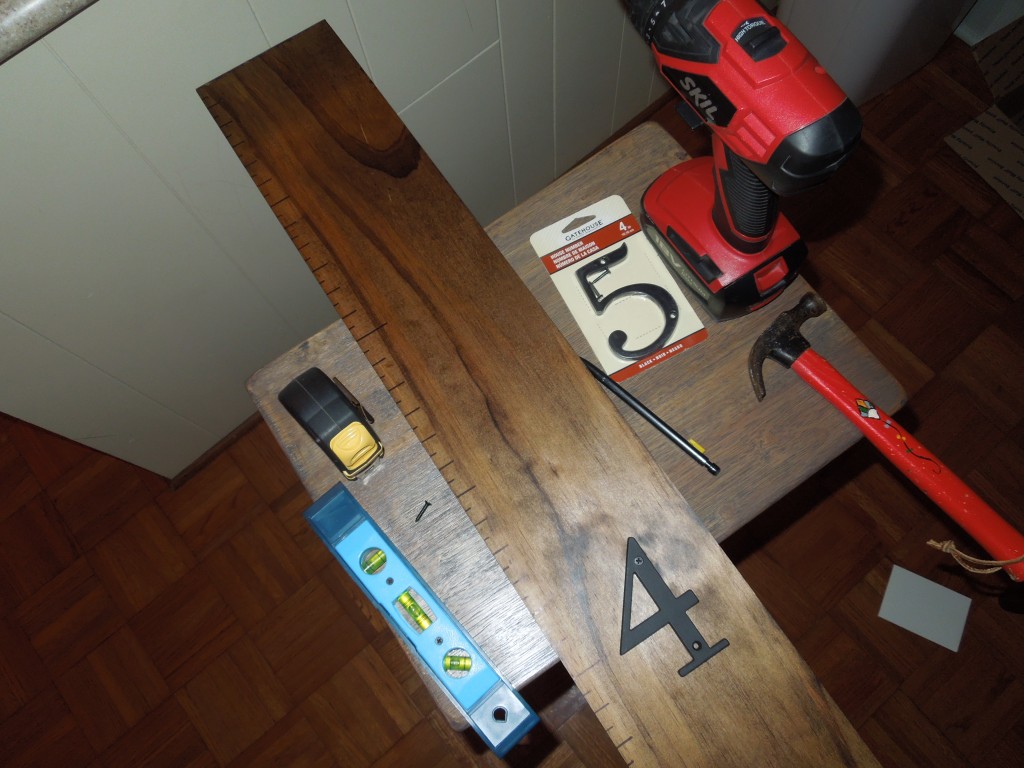 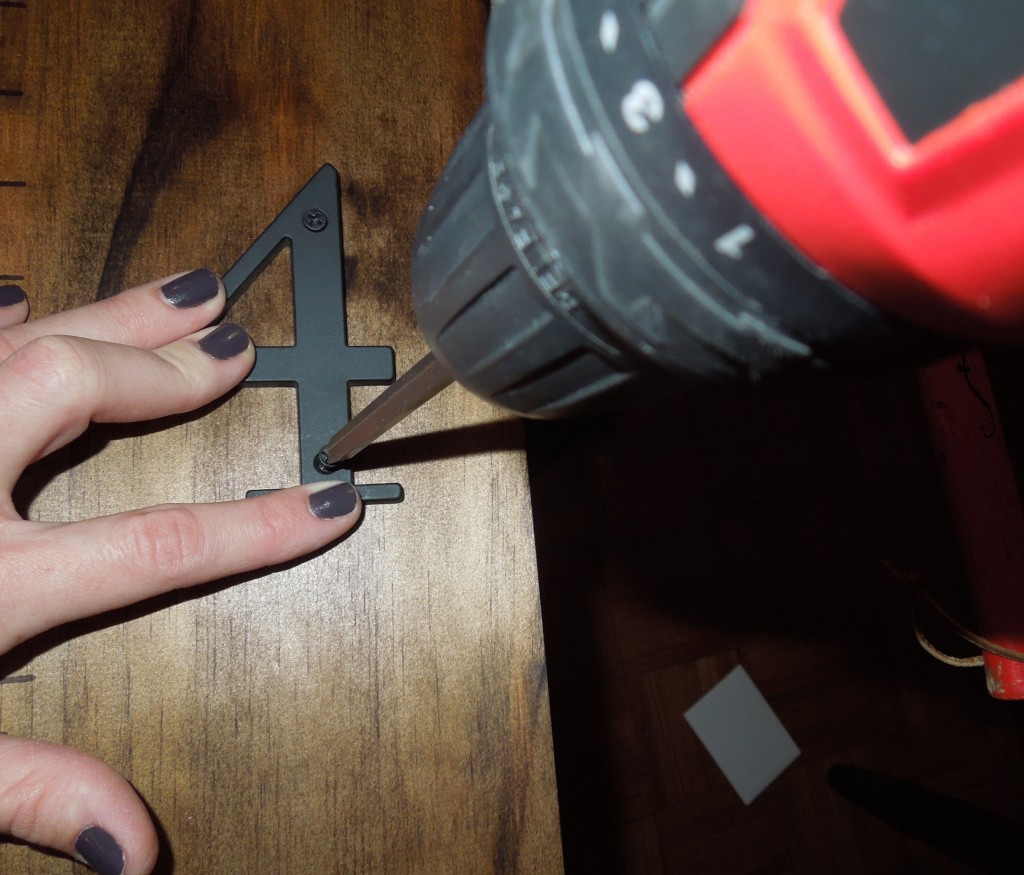 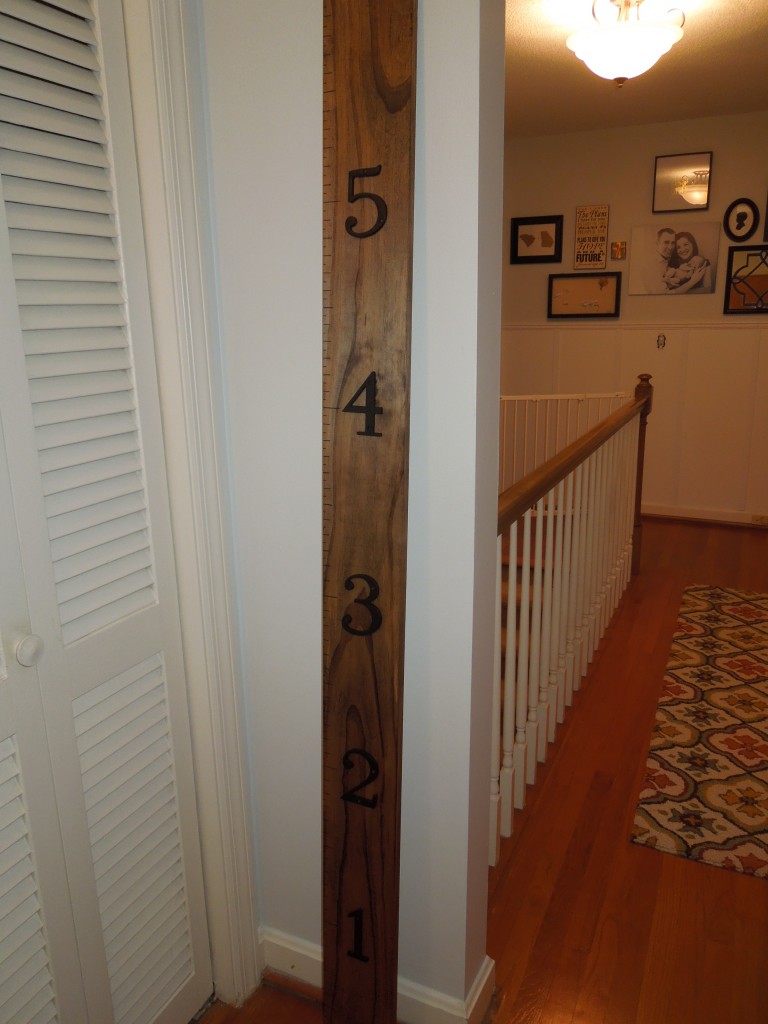 Reynolds was so proud of the growth chart I made for him and his sister…. 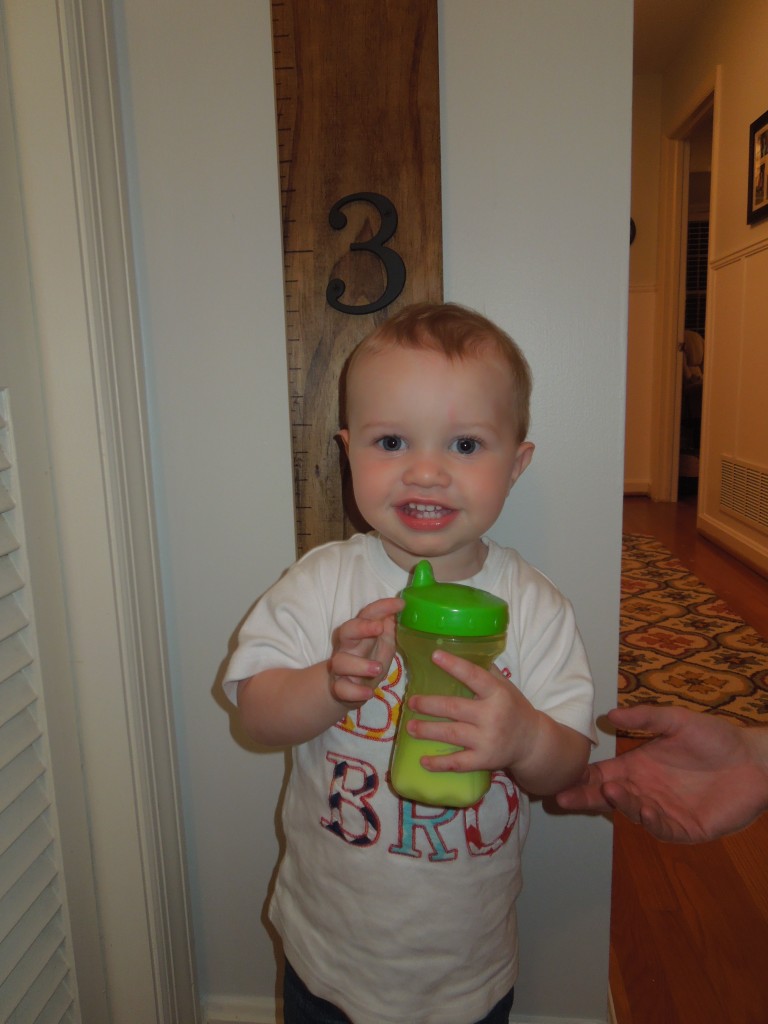 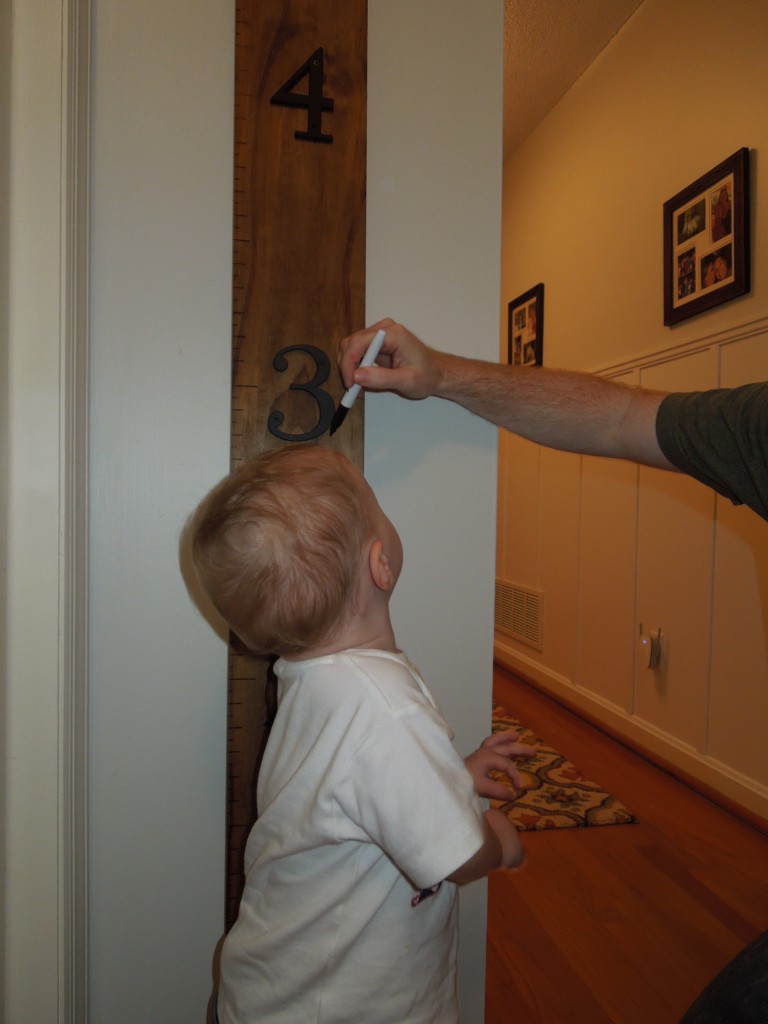 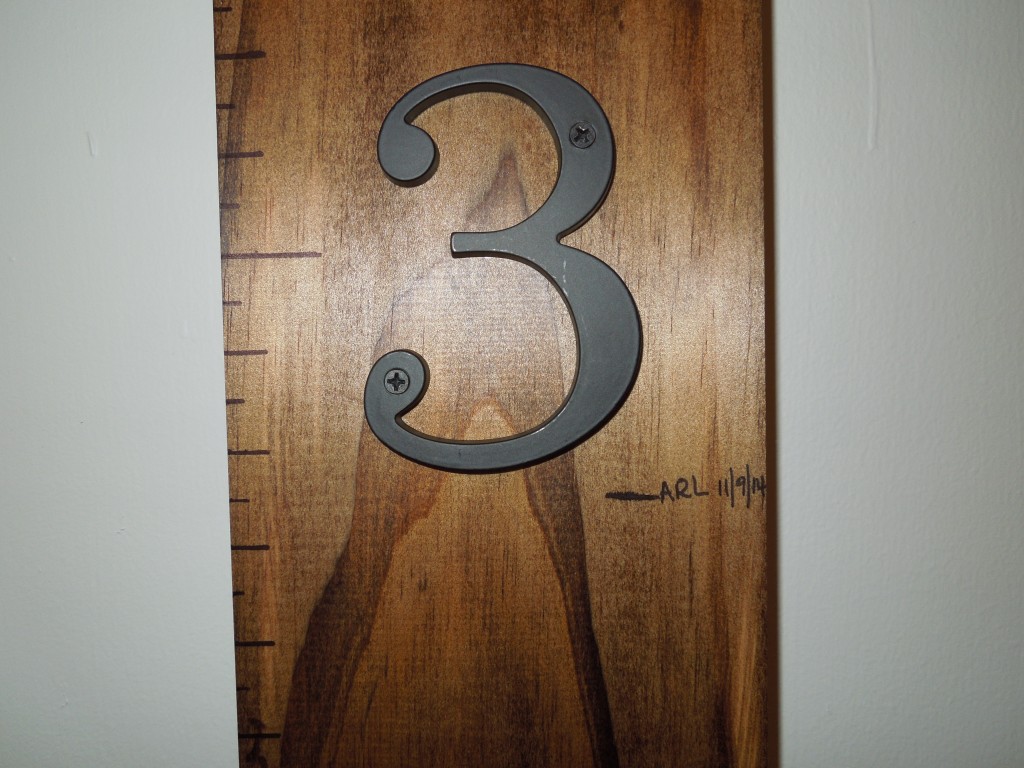 For all of time (at least while I’m alive), we will have this.  Another making of a memory 🙂

Want to make your own?  Here’s the list of materials I used:

Minwax Provincial stain (or any other stain you prefer)

Last but not least: a cute kid or two