Andrew asked me this morning what my plans were…here was the run-down:

Andrew left around 7:20 with the kiddos so I sat down at the computer, answered a few emails and started on review #5.

Then the phone rang….Andrew Lucas calling.  Hmm, wonder what we forgot, I thought.

“Hey babe!  Soooo…I’m gonna need you to go ahead and get the keys and then get in the truck…and come to daycare.”

I’ll let your mind run over a few possibilities for a few seconds…….

“Oh, no.  What happened?” – I said as my mind raced with possibilities.  After all, Andrew and Reynolds are together…which spells d-i-s-a-s-t-e-r.

“I gave Reynolds the keys…” he starts.

And you know….yes, you know what he’s about to say next…..

“And now the car is locked.”

“Ok, let me grab the keys and I’m on my way!”  I hung up the phone (saved the review – for all my TCG friends, this is extremely important) and raced upstairs to grab my shoes.

Back downstairs, grabbed my wallet, truck keys and my car keys (he was driving my car), hollered at Lily to get inside! and off I went.

Andrew calls again: “Where are you?  Should I call the police?”

20 seconds had passed since the last conversation, where was I supposed to be?

“I’m trying to get out of the dang neighborhood but there are about 10 yard debris trucks ahead of me.” {in reality there were 2 but they were as slow as 10!!}  and “Are the kids ok?”

“Yeah, they’re fine.  The truck with all the dogs is parked right here so Reynolds is ok.”

“Well, if they’re ok, then I’d say no.  I’m on my way and driving as fast as I can (within reason).  And if a policeman tries to stop me, well, he’s just going to come to daycare too!”

“Okay, this is going to be the longest 10 minutes of my life” he said.

I laughed as I weaved thru traffic on the way into downtown.  This is hilarious.  Of course this is going to happen.

As I’m about 2 blocks away from daycare I hear the sirens of a firetruck.  Hmmmm.  Could that be for us?  I wondered.

I got to the light where I turn left and then into the parking lot of daycare so I stuck out my arm and clicked the unlock button.  I could see Andrew and one of the teachers standing next to our car.  I was honking the horn like a cab driver in NYC.

Green means go!  I turned and then got into the parking lot to see Andrew taking Eliza Jane out of the car.

Andrew proceeds to tell me that while waiting, Reynolds not only took off his shoes and dropped the keys, but he also maneuvered himself out of his car seat….and then started freaking out.  The dogs left.  I blame the daddy who had the dogs, for leaving and taking sanity with him.

I got him out of the car and pointed to the fire truck.  As we both waved at the nice firemen (were they annoyed at us?), I said to Reynolds “You did that!  You made the firemen come!”  “FIA STUCK!” he kept yelling.

I then got the full story from my beloved.  He was just trying to be a good daddy.  I think he’s learned his lesson of either 1. never giving Reynolds the keys ever again as long as he is inside the vehicle or 2. getting a hide-a-key for when it happens next.

Funny thing was, the daddy with the dogs knew exactly what had happened…guess it’s happened to him before 😉 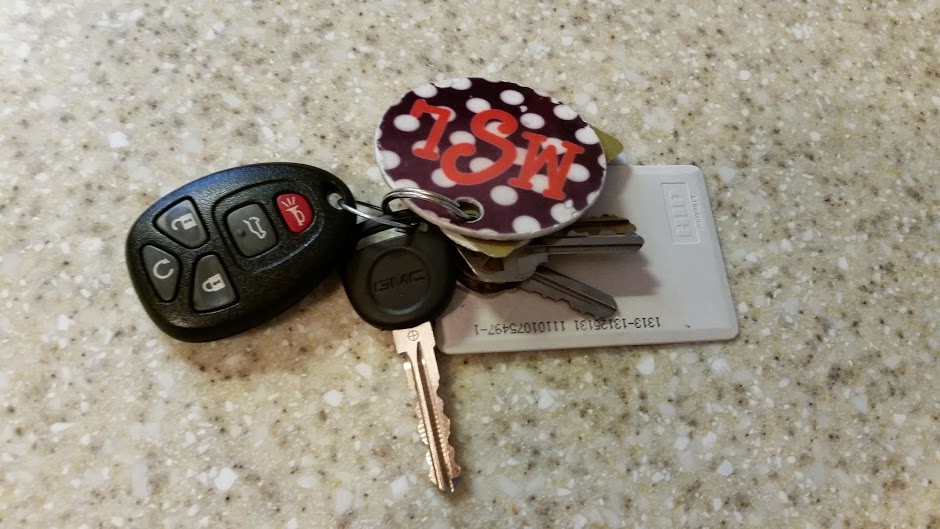