The very first time I ever had sushi I was terrified {read: scared to DEATH.}, like I was going to fall-off-my-stool-and-die kind of terrified.  I was eating RAW fish.  WHAT in the world were we thinking by eating RAW fish?  Wasn’t this incredibly dangerous?!  What was happening to AMERICA?!  In the South, we eat everything FRIED!!

This is for reals.

So here’s how it went down.  It was a hundred years ago and I was in this underground sushi place in San Francisco.  I sat on a stool at basically a moat.  A boat {I am making a rhyme but not on purpose} was pulling these tiny boats of raw fish around the moat… I have since learned that this IS actually called a sushi boat moat…I can’t make this up, folks.  If you saw something you liked, you just picked it up and put it on your plate.  It was the strangest way I’d ever seen food presented, or chosen…

Did I mention that I was terrified.  I had no idea of what anything was or meant.  Words like: sashimi, eel (!!!!) and nori totally freaked me out.  BTdubs, did you know you can eat eel?!  That is now a rhetorical question.

Looking back, I truly wonder what was wrong with me?!  It was probably some of the best sushi I’ve ever eaten it and I swallowed without chewing and chased it with Coke.

I had sushi with one of my most favorite people.  No, not Andrew…but she’s not far behind him.

Sara introduced me to a few different kinds of sushi here in Columbia.  She doesn’t know it, but one of my most favorite rolls is the Palmetto Roll at Miyo’s – and it’s all because of her.  We used to eat there together quite often and she always ordered it.

Sara moved to the beach a few years ago and whenever she comes to town and we are blessed enough to have lunch together, I’m pretty sure we always go for sushi.

Thankful I’m not so terrified of it anymore.  Sometimes when I really stop and think about the raw fish thing, I do get a little freaked out…

Strangely enough it was one of the things I missed most when I was pregnant with both Reynolds and Eliza Jane.  Nine plus months without sushi really is hard.  Well, not in the grand scheme of things, but it is.  I REALLY like sushi.

Sara and I had sushi yesterday at Tako-Sushi in Columbia and we got a few rolls, including the Crazy Roll…Y-U-M. 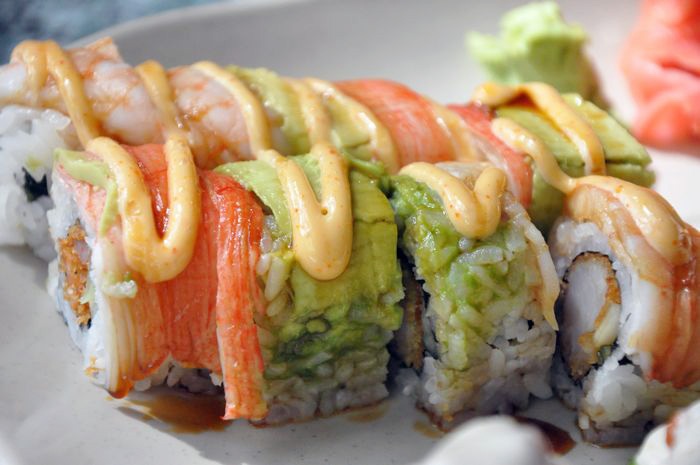 Now that I’ve made you REALLY hungry, go get you some sushi!

Do you have a favorite sushi restaurant?  Favorite roll?  Please share!