It’s been a couple of weeks since I first told you all about Lily, our 12 year-old Chocolate Lab.  As a recap: On Tuesday 4/14 I took her for a routine physical at which point our Veterinarian discovered some masses in her lower abdomen that raised concern for possible mammary cancer.  That Friday the results were confirmed and we were referred to South Carolina Veterinary Specialists, where she could see an Oncologist.

Our first appointment was Monday, 4/20 {also our son’s 2nd birthday}.  We talked about her chemo options and what things would look like going forward.  Her first chemo treatment was the very next day.

We were in the Bahamas last week…which was 2 weeks from the original appointment, and one week after the first chemo treatment.

On Tuesday of last week Lily had a follow up appointment to check her blood levels, etc. to be sure that the chemo wasn’t harming her body.  Andrew’s sister took Lily for us and reported that everything looked a-okay.

We got home late last Thursday night (after midnight) from our trip and Andrew said to me, “I don’t think she’s going to make it through the night.”  She had very short, shallow breaths which weren’t normal.  I said some prayers and went to bed.

The next day we were set to meet my parents around noon at my aunt and uncle’s home in GA, a sort of mid-way point for all of us, to pick up our kids.  {Thanks again Grammy and PopPop!!}

Andrew called our Oncologist around 10 {when we were about to leave for GA} and she told him to bring Lily in for observation.

Via a phone call not long after we dropped her off we were told that her lungs {mainly her right} was filled with fluid and it needed to be drained.

They removed a liter of fluid that day.

We walked into the office that afternoon, all four of us, to meet with Dr. Brown.  She basically said that Lily’s cancer presents itself this way and until the chemo started affecting the cancer the way it should, this would happen.  She said that we could think about what we wanted to do over the weekend, but that if we wanted to proceed with treatment, there was a stronger chemo that we could try the following Tuesday.

We talked a lot over the weekend.  We questioned ourselves.

“Are we being selfish to keep her here with us?”

“We committed to three treatments…”

“Her tail still wags and she acts like she’s still happy.”

Were many of the things we said to each other.

By Sunday evening we noticed that her breathing had become more labor intensive once again.  I called Monday morning, “I think her lungs are filling up again with fluid…”

I was told to bring her in and that our Oncologist wasn’t there, but Dr. Lucas {relative?!} was there.

I took her in and met with Dr. Lucas.

A wonderful, compassionate and empathetic lady she was.  I cried asking her some of the same questions I’d asked Andrew.  “Are we being selfish?”  She shook her head and said, “If we put her to sleep today would you regret it six months from now, thinking that you could have done more?”

“Absolutely, of course” was my response.  And I believed every word of it.  I didn’t think she was ready to leave us and I was certainly not ready to give her up.

“Well, then, I’ll drain the fluid today.  Bring her back tomorrow and we’ll go the more aggressive route.”

She drained around 850ml from Lily’s right lung that day.

On Tuesday I met with Dr. Brown who is one of the most gracious and lovely ladies I’ve ever met.  The compassion with both of these ladies is amazing.

Dr. Brown told me that we would do this more aggressive chemo treatment and that she wanted to see Lily again on Friday to check her lung fluid levels.  In short, she said that if we could get to Friday, that was a good sign.  If her breathing became short and labored again prior to Friday, that wouldn’t be a good sign and that we would really need to consider her quality of life at that point.  It was a hard thing to hear, once again.

Wednesday was a really hard day for Lily.  She barely had any energy and didn’t care to eat much of anything.  I feared for her.

Thursday was a little better.  We coaxed her to eat her food by pouring some chicken broth over it all 🙂

I was nervous all day yesterday.  I stared at her.  I studied the rise and fall of her chest.  I listened intently to the breathing in and breathing out.

Today I took her for her check up.  “We made it!” I thought to myself.  This has got to be a good sign.

She even seemed a little more chipper this morning when Reynolds and I came downstairs {at 6 am…}.

Dr. Brown gave her a quick look under the ultrasound and called me into a room.  “First glance and there is very little fluid in the right lung, which is a good sign because that is the one that we’ve been draining.  However, the left looks like it has some fluid, not nearly a liter, but cautiously I think it would be the best idea to go ahead and remove it before the weekend, that way we don’t potentially have to think about an ER visit over the weekend.”

I quickly thought that even though Andrew wasn’t with me, he surely would go the most cautious route {that’s just him} so I told her that I felt comfortable making that decision.

She asked to keep Lily all day, until around 5 that way she would have time to drain the fluid and then observe her to be sure that there are no other complications.

Andrew picked her up this evening.

400ml removed from the left lung, not nearly a liter and half of what was removed on Monday, and it’s been four days since then.

We’ll take her in for a recheck on Tuesday to be sure that there is no additional fluid build up.  If there isn’t, that means the chemo is doing exactly what it should {and we will do a happy dance!}.

We are cautiously optimistic and praying our sweet baby girl keeps fighting.

One of the most precious things through this has been Reynolds’ response to her.  We’ve told her that Lily is sick and doesn’t feel well.  Most days when we’ve gotten home from school he immediately asks for her.  Upon entering through the back door he immediately says, “Hey Lil-bug!  You ok?”  And then he wants to sit down with her and just pet her head. 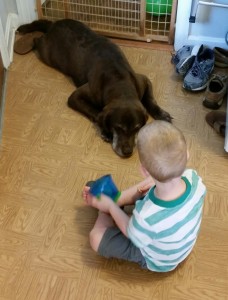 Thank you again for your prayers for Lily and for us.