So here we are. About 3 hours after “it” happened.
I was at home, working, when Andrew called to say he was on his way to pick up R from Daycare.  “Great! You’ll be home a little early!” I said before the rest of it came….”….to take him to the Emergency Room..”
“WHAT?! WHY?!”
“…called and said that he fell and has a gash in his head and needs a stitch or two…”
“OHMYGOSH!….”

Sigh.  Say a prayer.  Email some people to let them know I’m gone for the day, my son has to go to the ER…and then something about the fact that he is is father’s son 🙂 and that somehow this is comical.  Remember, it was a week ago that the hijacking started…man, I love that kid.  Never a dull moment…just like his daddy!

This was the blog post I’d been working on and was going to post later tonight but it was hijacked…
“Happy Hour”
I work with a really great group of folks.  Fun people who enjoy laughter and relaxing with each other.  A few months ago, some of us got together for Happy Hour and decided that we’d try to make this a semi-frequent occurrence.  Taking place at our homes rather than going out.  It’s not as expensive, people bring things to eat and its definitely more relaxed.
Today we hosted.
It was going to be a small crowd coming…only about 8 people.  Which was fine.  It’s intimate.  Not too crazy.
In preparation, I had a small menu planned…
A great chicken salad recipe I found at Real Simple a few weeks ago.  I made it without the mayo since one friend coming is a no-dairy eater.  I found some great Pita Bite Crackers at Trader Joe’s to serve with the chicken salad.
Next, I chose some Edamame – I mean, it’s easy, yummy and nutritious!  Just throw that bag in the microwave and voila! it’s done!
Then, I put together some easy fruit kabobs with blueberries and raspberries.  They also served as a garnish for the White Sangria I made.
Also at Trader Joe’s, I picked up the Guacamole Hummus (it sounded amazing!) along with their Veggie & Flaxseed Tortilla Chips.
Last thing I purchased was a wedge of their Asiago Cheese with Rosemary & Olive Oil (yum).
I mentioned the White Sangria…I really, REALLY enjoy Sangria in the summer.

That’s where it ended.  It never happened.

I’m happy to say that when I got to the ER, this is how my sweet boy looked: 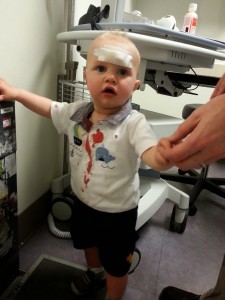 And besides the fact that he didn’t care for the nurses pulling and poking at him, he was in a really good mood.  He laughed and was being totally himself.  Another sigh and “thank you, Lord”.
Then we were taken to another room where the Doc came in to check out the wound.  I may have grimaced…to which Andrew said “I told you not to look.”  Gee, thanks honey.  He’s my son, I kind of have to.  Thankful that I don’t have a weak stomach.
Doc said glue should work just fine…the wound was just small enough not to have to do stitches and this should prevent a worse scar.  I told a friend, I don’t really care about the scar…maybe one day when he’s a hunk looking himself in the mirror he’ll be mad at me and I may kick myself (yeah, right), but I just want what’s best.
Glue it was and we’re happy so far with the result.  Now to keep the kid from running with a Xylophone….yep.  That’s how we got here.  He was enjoying play time at daycare, and got excited (?), and then decided to run across the room with the xylophone in hand…feet got tripped up {he’s not a pro yet at this walking/running thing} and BOOOM! down he went.

As one (male) friend posted on Facebook, chicks dig scars… 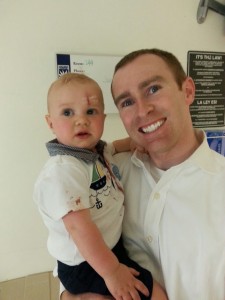