One of the projects I tackled this past weekend was making some bows for sweet Eliza Jane.

As you recall from Friday’s post I went into planning (panic!) mode with my to-do list so I was energized to get some things done.

First thing’s first – the girl’s gotta have bows!  I can’t handle someone coming up to her (in pink no doubt) to ask me if “it” is a he or she?  Must.Have.Bows.

Our office closes at 4pm on Summer Fridays so promptly at 4 (or shortly thereafter) I busted out to get R from daycare.  Daddy had gone home with a headache so I thought, we’ll give him some time to rest…we’ll run some errands.  So I took out my to-do list and quickly decided that I’d go buy some ribbon and maybe get some other ideas for Eliza Jane’s room.

Hobby Lobby was our destination.  R loves to be out so it was great for him too…he found lots of people to wave and smile at while I was busy gathering ideas for baby sister’s room.  Over on the ribbon aisle, we had some fun.  Reynolds was trying to pull off every spool he could get his hands on while I was being a bit more…picky.  I asked his opinion of some colors, and if it was thrown on the floor, we didn’t get it 😉  R had lots of thoughts of some of the ribbon I picked out…many of which he verbalized but being he’s only 14.5 months old I had no idea what he was saying, so I pretended he was in agreement.

I picked up a few other things (to be posted about at a later date) and within an hour we were done and I felt a little bit of accomplishment!

Once R went down for the night I tackled my bows.  I was so thrilled while walking down the ribbon aisles that Hobby Lobby had great “How-to” pamphlets!  I knew I loved that store.  I’d previously watched some videos on YouTube but this was much better. 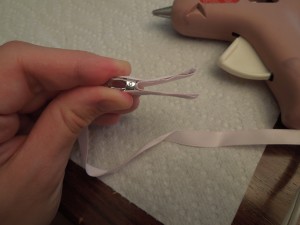 First, I started with hot-gluing ribbon around the clips…this was a lot easier than I thought it would be.  But man, watch out for that glue because it is HOT. 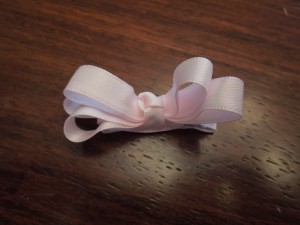 Then, I made a few little bows because she’ll have a little head at first and we can’t have her wearing those ginormous cheer-leader-style bows when she’s teeny tiny…. 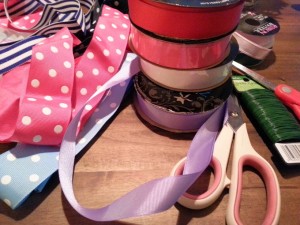 Next was to make some mid-sized bows and a couple of bigger ones.  With some ribbon I had from other projects and with the new I’d just purchased from Hobby Lobby, it was go time.

In a matter of less than a couple of hours I had these beauties and was feeling really proud and crafty and excited! 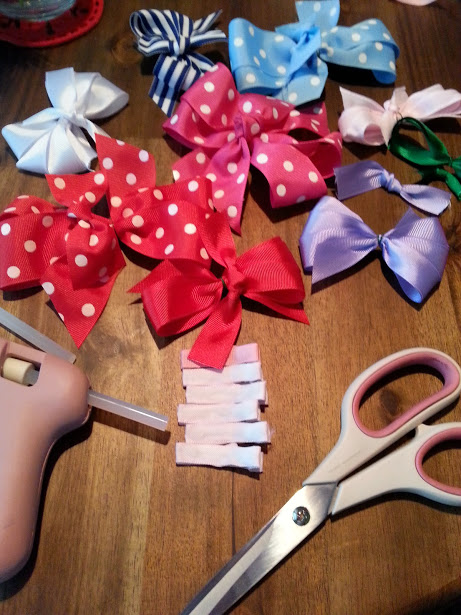 Here they are on Eliza Jane’s bow frame that I made last month.  YAY!!!