I don’t know if it’s that well-oiled, but my Nama’s sewing machine is da-bomb.  I inherited this machine a few years ago and have been too scared to do anything with it.  Scared in that I would break it or somehow not be able to show it the TLC that I know my grandmother did.  So it was used as a bedside table in our guest bedroom for a while.  Then it became an end table; then it was stuck in the office as just another surface to collect…stuff.

Until a couple of months ago when I was making those overlays for our friend Dana who was having a graduation party for her sister in law…my sewing machine broke.

That machine wasn’t as special as my Nama’s so I put it in a closet and brought out Nama’s.  And stared at it.  I didn’t have the nerve, it turned out, to try to use the thing.

It wasn’t until my friend Aimée came over and just so non-chalantly said, “Yeah, get out the manual and read up on how to use it.”  Duh.

So I did.  On Tuesday of this week, I opened up the manual, read thru it and was amazed.  First by the inside cover letter: 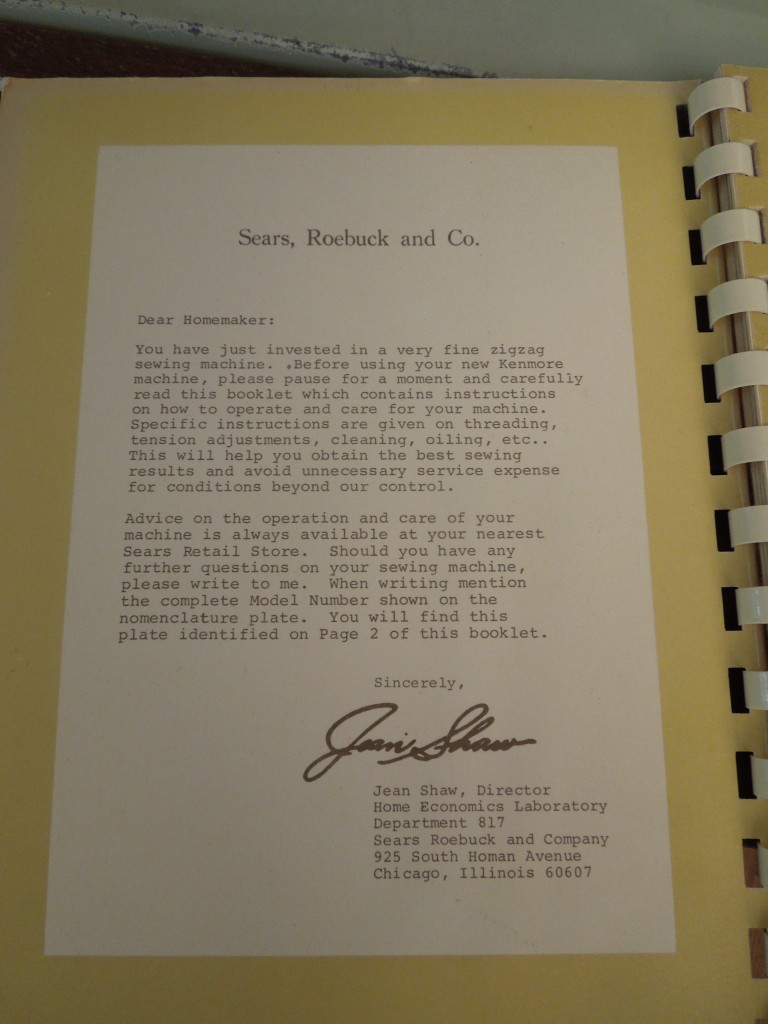 You see that, Sears had a Home Economics Laboratory…and if I have any questions I’m going to write Ms. Jean Shaw directly.  This is incredible to me.  So personal.

As I read thru the manual I became more and more excited about this machine.  From knowing my Nama, I knew she didn’t buy cheap things.  When she spent money, she spent money and it was for quality items.  This sewing machine is no exception.

I read about the monogram plates (seriously?!), the cams (still not entirely sure what those are or how to use them), the button holer, etc.  And then  unloaded all the pieces and parts. 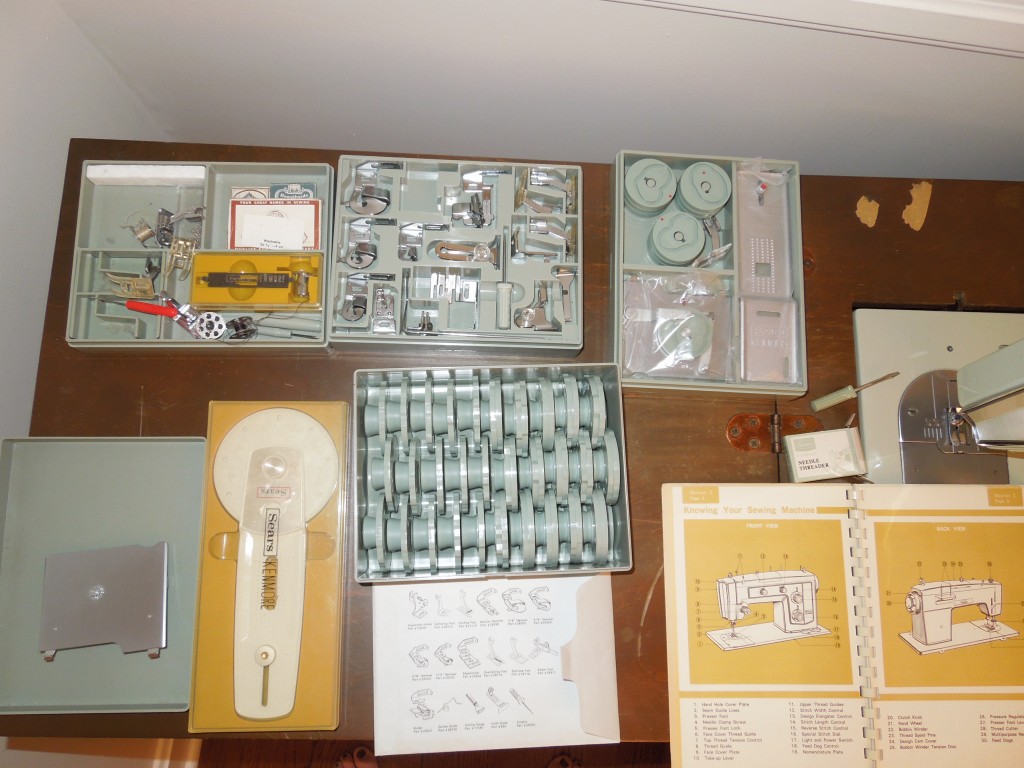 After taking inventory of what all I had, I decided to try to use the machine.  First thing first, how to thread the needle.  This was actually really {REALLY} complicated.  I had a really great diagram, complete with Fig. 1s and 2s and 3s, but I was still lost.  Skip the needle, let’s try the bobbin.  This is where I became completely smitten with my new-found machine.  Threading the bobbin is amazing, fast, efficient, fun.  I was so excited about the ease of this task.  Then I tried to load the bobbin and well, I couldn’t.  My bobbin case was missing.  Certain I didn’t have it, I made a trip to Hancock Fabrics where the nice associate told me that they didn’t carry them, and to try a sewing center nearby.  Yesterday afternoon I went to said shop… 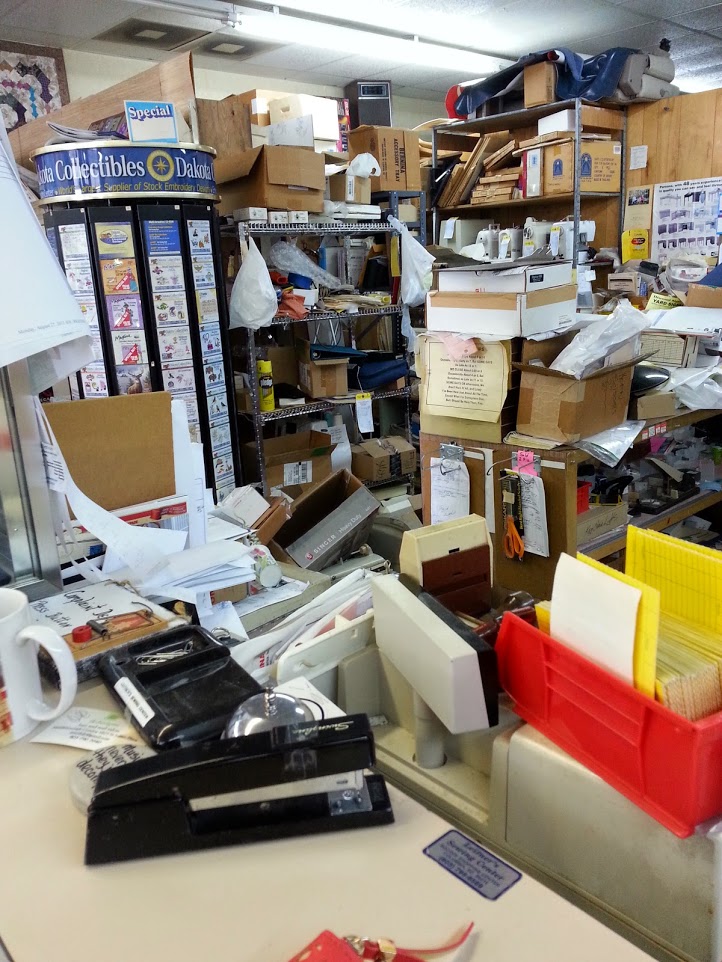 True story.  I actually sent this picture to Andrew with the caption, “I lost Eliza Jane!!!”  I mean…this…is impressive.

I don’t know how the store owner found it {honestly, I don’t know.} but he found me a bobbin case to fit my machine so back home Eliza Jane and I went.  After a few tries with the bobbin and needle thread {it took a while, but I finally figured it out!}, we were off to the races sewing!  When Andrew got home I gushed about how great my “new” sewing machine was…how easy it was to use and how “smart” it was! 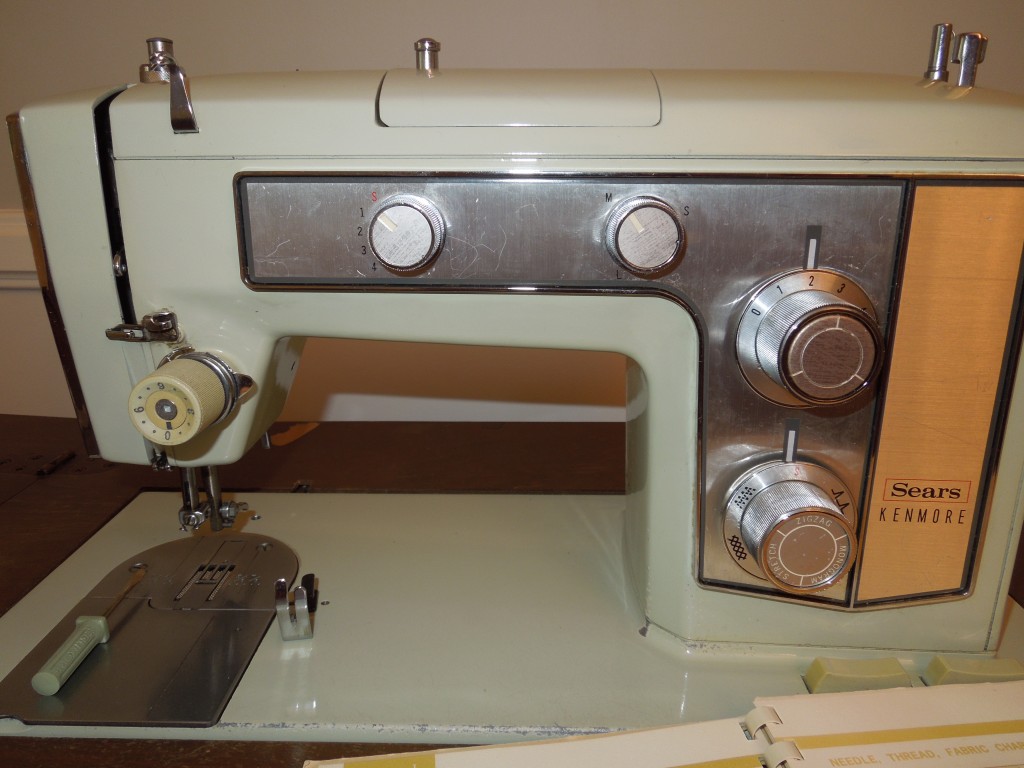 I am currently working on a few small projects that I hope to share with you all next week…meanwhile, I hope you have a great weekend!