Juliet asked the question, “What’s in a name….”

Well, if you’re my husband, everything.

For over four years my name on Facebook read as my maiden name.  Not including my new married last name.  Except where your “other name” is listed.

No, I am not a feminist.  {Please don’t threaten my life for that statement}  No, I didn’t ask Andrew to change his name to mine and he just refused to change his profile on FB (imagine!!).  And no, I did not forget to change it on FB.  Where, we all know, is the first place to make any relationship status change, including the changing of your name once you’ve said those I do’s.   It seems that if we could change them right there at the altar, we would.  …………………

No, I was so incredibly ecstatic about the nuptials that as soon as we got into our “chariot” from the church to the reception, I snagged my phone and went to changing.

Not sure if there was a server glitch on that beautiful night, but it wouldn’t take.  I tried.  I tried.  And I tried.

To the point that if I could have been locked out of changing my name, I think FB would have done so.  WHY. WON’T. IT. WORK?!  All the way to our reception, I tried.

I received some sort of ridiculous alert stating that my max number of name changes had been reached and to please cease and desist.

I was super annoyed.

The night of course went on and the next day I tried again.  Nothing doing.  What the heck.

Over the next few weeks I would attempt to submit my marriage certificate (the honest to goodness truth) to FB, pleading that they allow me to change my name.

As you can see, my biggest wish was never granted.

A friend messaged me a year or so ago asking about it so I told her that I’d tried, but was not able to change my name.

Andrew wasn’t a big fan.  He really wanted my name to show as it should…Michelle Seay Lucas.  Or even just Michelle Lucas.  He’d be completely fine with that…just as long as it said Lucas at the end.

I thought about closing my account and just starting over.  I think Andrew would have appreciated it if I had done so.  Especially when Reynolds was born.  Would he grow up wondering why I didn’t have his father’s last name in the greatest social networking site in the world?

Let’s not be so dramatic.

So what happened, you ask?  Saturday morning, when I woke up {and everyone else was still asleep}, I checked out Facebook.  And then my curiosity kicked in…I wonder if I can change it, I thought.  So I went to my settings and was immediately told that I could not change my name because I had done so in the last 60 days.

Liars.  “I have most certainly NOT changed my name because YOU won’t let me!!!” I wanted to yell at the screen.  But I didn’t.  I read on, clicking the links for related topics that might be helpful {to anyone working at FB, they were NOT helpful in my particular situation}.  I read through the section that stated I might have to provide some sort of identification – government-issued, of course, to show my name change.  I thought, I’ve already done that once and got nothing.  The only reason, that I could find, that you would not be able to change your name is that if you’d done so in the last 60 days.

I did.  I went back to the beginning where it stated that I could not change my name due to it having been changed in the last 60 days.  Since I knew it was wrong {and angry about it}, I put in my name as it should read:  Michelle Seay Lucas and submitted it.

I didn’t say a word.  I didn’t tell Andrew that once again I’d tried to take his last name because yes, I wanted to be known as Michelle Lucas.  I didn’t want new friends to wonder why my name didn’t match his and who is Michelle Seay? {Now you know my maiden name}

Sometime in the late afternoon I went up stairs so that I could start getting ready for an event that Andrew were going to that night.  I got Eliza Jane settled in her little swing and pulled up some music on Spotify.

I sat down at my dressing table and pulled up FB.

Wait.a.second.  What did I just see?

I clicked on my profile.

“IT WORKED!!!” I laughed out loud!  I was so excited that right there in that moment, I posted on FB.  I exclaimed to the world {well, the small part of it that is mine and Andrew’s friends} that FINALLY!!! My name was changed.  VICTORY!!!  I felt like I’d gotten married all over again!  A new husband, a new last name!  Yippeeeeeeee!!!!

The name is still there today, so I know it’s not a fluke.

Thank you.  Thank you Facebook for answering my 4-year-long wish.  I am a happy girl and my husband is a happy man. 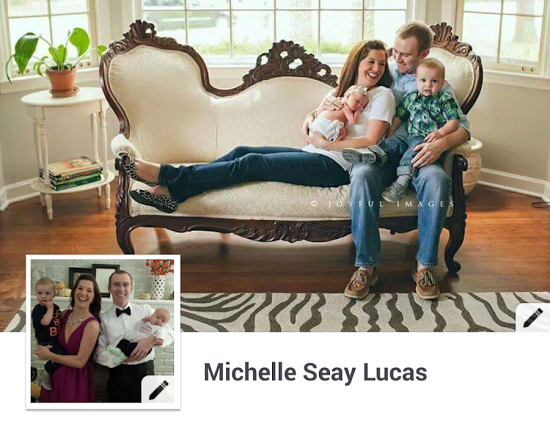