I don’t even know what to say.

It has been a really tough 2 days here in Columbia, SC, and all over SC to be completely honest.  If you’ve seen any news report of anything, you’ve seen our devastation.

Neighbors and friends have been displaced.  Lost their homes and everything they own aside from what may have been thrown into a bag or two and what they had on their very backs.

Friends with babies were raced into boats to escape the flood waters that took over their homes yesterday.

I spent most of Sunday texting friends to make sure they and their loved ones were okay.

We had the news on the tv non-stop it seemed.  Even when Reynolds asked repeatedly to watch football or anything else {bless his heart}.  I was glued to what I was watching unfold.

This is how it looked for me: Sunday morning, early in the morning I woke up to the pounding of the rain on our roof.  At one point, around 3:30 am I finally got up to look out the front window to see how things were looking.  We had a river of water flowing from the main road on to ours.  The front yard didn’t look too bad.  At 7 I got up and noticed patches of water in the front yard.  “Not too bad” I thought to myself and went downstairs to get on the treadmill.  I read my devotional.  Then I got on Facebook.  A sweet friend and old neighbor had posted something about her sister, brother-in-law and four kids were trapped in their home and needed rescue.  Her husband, father and father-in-law had spent two hours trying to get them out.

“What-in-the-world!!!” I thought to myself.  What is happening?!  Then I turned on the news and saw it.  People’s homes were already flooding.  Church services were being cancelled.  People were being urged to stay at home.  One news person said, “I cannot think of a single church that is having services today, PLEASE stay at home”.

I grabbed my rain coat and umbrella and went out to survey any possible damage to our neighbors’ homes.  One new neighbor {they moved in about 2 months ago} had standing water in his carport and he seemed to be staring out their front window at the rain that continued to pour down.  Water was rushing into the storm drains.  I posted some comments on a Facebook page set up for our street and to let one neighbor, who is out of town, know that her home seemed to be okay save some water standing in her carport.

I came back home and went upstairs to take a shower and heard static.  Nothing.  No water.  Just like that it was all gone.  It was all on the outside of our home instead of inside.

When Andrew got up he heard that the hotel had many leaks so after talking to several folks decided that he would try to make his way there.  He never made it; the water and flooding was too great.  Every avenue was blocked.  Thankfully he kept turning around.  At one point he called and said how much his heart had been racing because water had come inside his truck.  I may have yelled at him.  I may have said a curse word….  He assured me that he was fine…he was with a tow-truck…

At some point in the afternoon he checked under our home.  He came inside and said that we had about two feet of water under our house and that he would have to find a way to get it out.  He dug out some trenches; he used our water hoses to suck it out.  Then he announced that he was going to try to get to Lowe’s.  I told him if he felt like he must go then, “fine”.  Our Lowe’s was flooded.  The storage houses were in various places around the parking lot.  Andrew said he was going to go to the next one.  It was open and he was able to get us a sump pump.  He said that there were people buying the last two generators off the displays.

Andrew got home and hooked up the pump.  Water came rushing out of the bottom of our home…it was incredible to see.  We filled up a bucket or two to be able to flush toilets {we’re resourceful!}.

The rain continued to fall.

I had a cooler sitting on the back patio that literally filled to the brim with water – and that became water that I boiled {for what felt like all day} to be able to use to wash dishes, wash faces and whatever other use we might need.

Some neighbors came over for supper last night – what else were we all going to do?  We sat around talking about how incredible it all was and how extremely fortunate we all were that we were just merely inconvenienced by not having running water.

This morning we were able to get out and get to the hotel.  The water there had come back on during the night or early this morning {thankfully}.  On our way I saw roads that were still covered in water.  Roads that were no more.  Abandoned cars in parking lots and in the middle of the road.  One way was still blocked so we had to turn around and try another route.

As we made our way into downtown I could see the firetrucks at Palmetto Baptist Hospital – assisting in the efforts of increasing their water supply, as I’d seen on the news before we left our home.  I prayed again for the people helping, the doctors and the nurses and for the patients and their families who I’m sure have had additional worries and stress from all of this.

At the hotel we were definitely safe, warm and with running water.  Andrew and his sales team assisted the housekeepers in making guest beds and running the vacuum.  {I entertained our kids}  They posted something on social media about being a place for displaced families to come to – I shared it on my page.

This afternoon, back home and after it seemed somewhat quiet, there was a mandatory evacuation for another part of our neighborhood {which was declared “ground zero” for flooding yesterday by the news paper}.  Our best friends’ house was in danger.  Andrew had set them up with a room at the Inn and they were safe.  My girlfriend texted me “Bella is on the back porch”.  I started crying and told Andrew he had to go.  “You have to go get her!”.  We woke up our neighbor across the street and the two were off to rescue Bella and another dog who belonged to their neighbor.

Twenty or so minutes passed and I heard dogs barking.  Bella and Henry {who is a small horse} were running around in our back yard having a blast.  “Praise the Lord!!” I thought.  They got there and back and the dogs are safe.

As of now, I believe that dam is okay – I haven’t seen any other reports of it being in additional danger.

To say that this has been an eventful last two days is an understatement.  Helicopters flew for hours overhead earlier this evening {and are actually still flying…}.  The road coming into our neighborhood, that I’ve driven thousands of times, is now in someone’s back yard.  Quite literally.  I heard from one of my neighbors who is friends with someone on FB who has it washed up on their back yard.  I can’t even imagine that.  “Hey, honey.  So, that’s Rockbridge Road’s bridge…yep.  Right there in our back yard…” 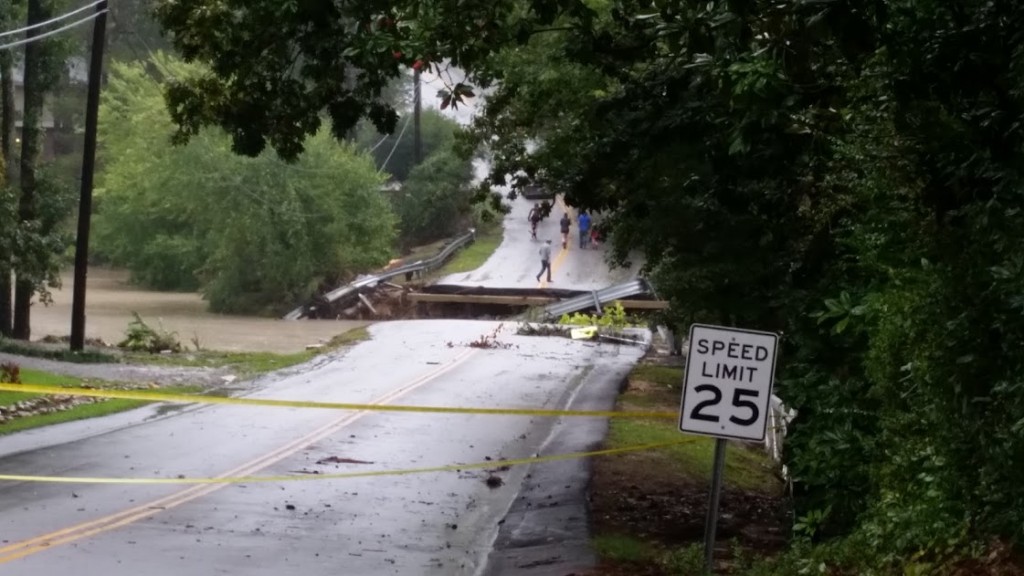 I saw images of my boss driving and guiding a boat with folks that he and others rescued from homes yesterday.

The stories and images are incredibly sad and difficult to absorb.  The places we shop were completely under water yesterday.  The Michael’s I went to Saturday night to get paint was how-ever high in water yesterday.  Words cannot describe what has happened to this city.  To this state.

Roads are crumbling all over the place.

I pray for those who have come from out of town to help us and for safety for so many who are still out trying to prevent further damage and repair that which has been done.

Sometimes I have no words but I trust that my Lord, my Jesus, knows what His people need and I trust that He is giving grace to the humble, strength to the weak.  Is. 40.

To my friends reading this who do not live in SC…I ask you to pray.  If you’re able give:  RedCross.org/sc – and if your employer will match it, please ask them to do so.

Thank you for your love, for your words of encouragement and for your prayers…we need them more now than ever.