Are nachos a new thing?

I ask because in the 40+ cookbooks that I have there is not ONE single recipe for anything nacho-related.

Just so you know, I did do a little research about this Tex-Mex dish, to be sure that I might even have one cookbook that might have a recipe…and even the Tex-Mex Food Truck book I have didn’t have anything!!

The story of how nachos came about is a pretty interesting one.  I found this from Wikipedia {my trusty source!}:

In 1943 wives of U.S. soldiers arrived at a restaurant after a shopping trip and Ignacio “Nacho” Anaya invented the new snack with what was available in the kitchen: tortillas and cheese.  He cut the tortillas into triangles, fried them, added cheese then heated them up and topped them with sliced pickled jalapeño peppers.

So the basics of what we might eat today could just be just tortilla chips, cheese, sour cream, olives, jalapeño peppers and/or salsa.

BUT!  For Friday’s National Nacho Day I had to give you something better than just the basics!  I found some really great recipes on the world wide web and hope you find at least one below that you might want to try out on our National Nacho Day!

First: The Pioneer Woman! – Loaded Nachos and these things look incredible!  A strong contender for our Friday night nacho dinner! 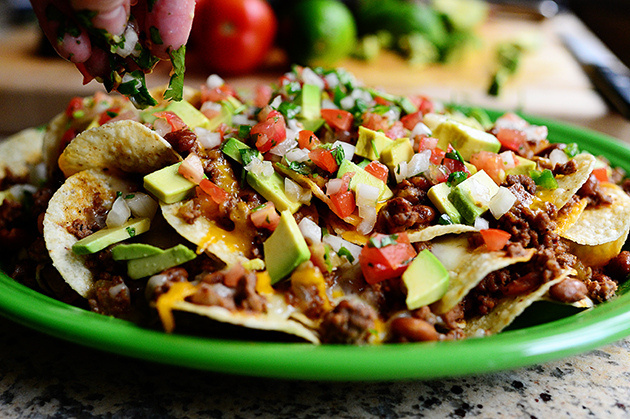 Third: Martha Stewart serves up a Chicken and Black Bean Nachos recipe that just might be the prettiest to look at…

Fourth: These Betty Crocker Skillet Chicken Nachos got some pretty great reviews online and are super speedy in just 20 minutes from stove to table!

Which one looks the best to you?

If you try any of these recipes on Friday, please be sure to post a comment-review!