This may or may not be based on real events that actually happened…tonight….

I’m going to pretend that you are snuggled up in your bed with your device and this is the last thing you read and laugh out loud about before you close your pretty little eyes tonight.

Once upon a time…work with me here….there was a momma who was in a hurry to get home while the sun was still shining.  She was so excited when she pulled into the driveway at her home that she immediately got both of her kids out and practically threw them into the back yard so they could play!  {No, I didn’t REALLY throw my kids!}

Her son found a piece of moulding and was marching around in the backyard like a soldier and her daughter was just standing around with her fingers in her mouth.

The momma said to the daughter, “Eliza Jane, do you want to go swing with momma?”.  Eliza Jane shook her head “no”.

But the son said, “Momma!  I want to go swing widst you!”  So he dropped his long piece of moulding and took off running towards the swing.

The son and the momma climbed on the swing and started swinging, laughing and having so much fun.

The daughter…seeing how much fun they were having, decided SHE wanted to swing too!  So she ran across the yard as fast as her little legs could carry her, to get to the momma and brother.

The momma slowed the swing so she could pick up the sister, and once she thought everyone was on the swing, they started swinging again.

The momma’s feet went straight up into the air!!!!!!

The son was sliding down into the momma’s arms!!!! The daughter was lying on the momma’s chest.

Everyone was laughing.   Well, everyone but the sister, who was completely frozen.

The momma realized that as her feet were sticking straight up into the air, her back wasn’t exactly touching the ground yet.  She debated on how far she was from the ground…should she just let go! or…somehow ease herself down.

The brother quickly got up, laughing hysterically.  The momma sat up, laughing.  The daughter, with fingers in her mouth, realized that she was ok and giggled.

The brother decided he wanted to swing again so the momma put him on the swing.

“Momma, you and sister swing widst me!”

They started swinging.  They were going kind of sideways so the momma said, “Hey Reynolds, let’s stop just for a second so I can get us straightened out.”

So they stopped and the momma got the swing going straight again.

“Yep!  I think we’re done!” Said the momma as both kids started crying and screaming…The end.

**no one was hurt in these “real-life” events**

…meanwhile, I have no idea how I was able to swing back in November with both of them without falling off on my rear end… 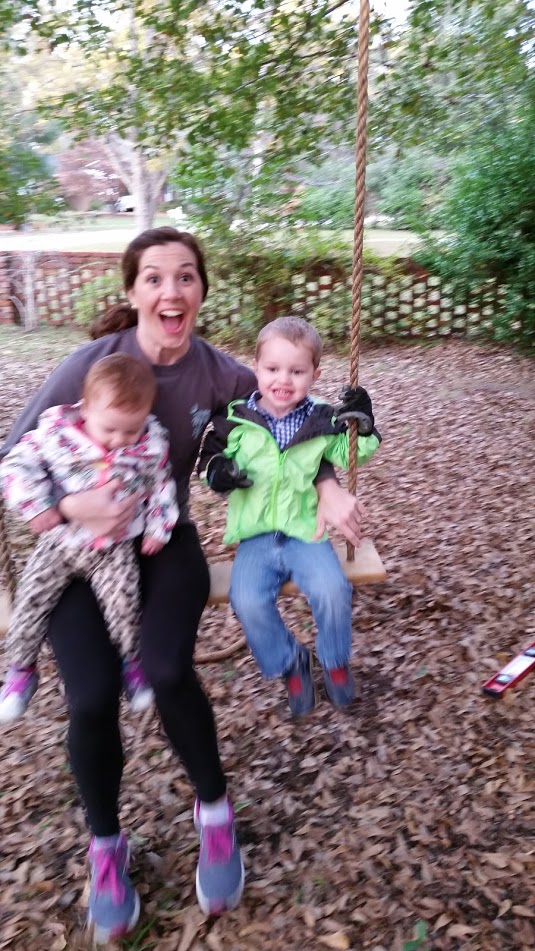 I hope all you kids have a lovely night! I’m going to go pull the rest of the leaves and acorns out of my hair! 😉