If you google it, you’ll see the one from Anthropologie that is just simply put…gorgeous {and also humongous}.

Or the fun little half circle one from PBTeen.

We bought our king-size mattress set two years ago. So for two years we’ve had just that basic metal frame with no bells or whistles for a head- or footboard. I remember being so excited about the massive set {wish y’all could have seen Andrew and me pushing that mattress up our staircase…} and spending all the ‘extra’ money we had on Pottery Barn bedding and a fabulous little accent pillow from Anthropologie.

We’d put the actual bed on the back-burner, knowing it would take time and a chunk of change to get what we really wanted, which we thought was a four poster rice bed.

We actually have one that is a queen, but as all these babies kept popping up in our home, we decided that we would need a king for us all to fit in on a scary, stormy night.  Which, has yet to actually happen…and I fear that when it does, we still won’t all fit. {Eliza Jane’s legs grow by about 3 feet when she’s sleeping…}

So back to the headboard…I don’t really know what happened, but I ended up googling Bohemian Headboard on Black Friday…and lo and behold, the next thing I knew I was buying one from Home Depot. First of all, who knew that HD now sells furniture? Not this gal. I’m a Lowe’s girl most days of the week so I was thrown off by this discovery.

I showed Andrew the headboard and he loved it as much as I did. And y’all, the price was a steal at 50% off! Before I really knew what was happening I was clicking the “place order” button on the screen with a massive smile on my face.

We had it delivered to the store and when it came we decided that we were too busy to go pick it up so Andrew so non-nonchalantly stated, “I’ll go get it one day”. And he did. One random afternoon a week or so ago, I pulled into the garage to see a massive box sticking out of the bed of his truck. I walked in, and with all my smarts said, “You picked up the headboard today, huh?”

The kids were just as excited as we were to pull that box down and rip all the cardboard and Styrofoam away.  It is more beautiful in person than in was in the pictures. And heavy. It’s a wee bit heavy. But gosh it’s pretty.

It leaned against the wall in our bedroom for a few days before I had a vision of Emory walking in front of it and it crashing down on top of his head, flattening him to the ground, that I announced we were putting it up!

{Could we pause and laugh about the things that go thru the mom-heads? I mean…we’re crazy.}

That was Sunday, and in about an hours time, we had the bed moved to where it would remain {until I get that itch to move things around again}, holes drilled into the base of the headboard….yes, it came pre-drilled, but the holes didn’t match our frame so Andrew had to drill new ones. {I’m so thankful he’s handy} And it was all set up with fresh sheets and I just wanted to stare at it in complete thankful- and happiness.

I kept saying, “It’s so pretty. Isn’t it so pretty?!” that Andrew just laughed at me.

But isn’t it so pretty? I hate that you can’t really see all the beautiful detail with the 11 {ELEVEN} pillows on our bed…but it is really pretty. 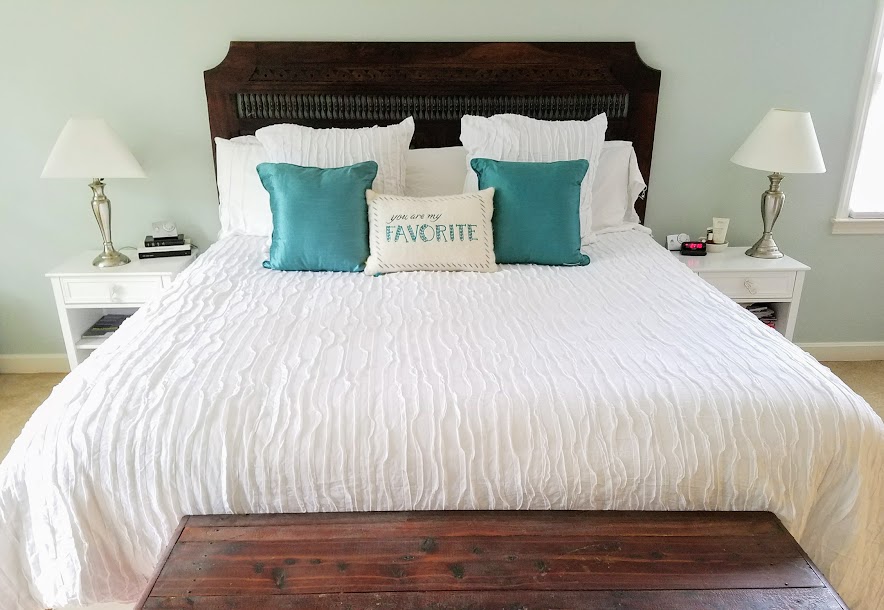