Yesterday our sweet baby girl was baptized at our church. 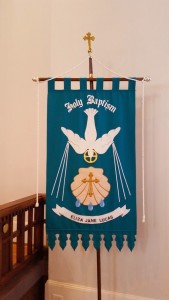 Both sets of grandparents were there, along with our adopted grandparents {we adopted them….}, Andrew’s sister, our sweet across-the-street neighbors and precious friends, DJ and Dana.  I am so thankful for all of these wonderful people, who love us and our babies. 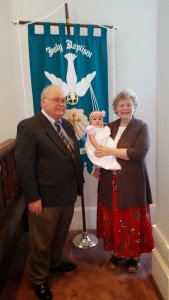 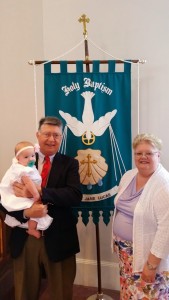 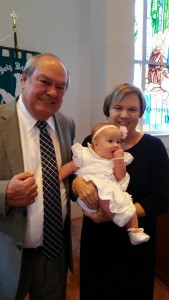 The baptism itself was event-less….which is sort of a good thing.  She didn’t cry.  Nor did her brother…  We all stood at the font, all four of us.  Andrew holding Reynolds, who I’m quite sure is now half our size.  And I held Eliza Jane.  Reynolds was doing just fine, holding his cup of mini Nilla wafers {life savers!}.  And as soon as I passed off Eliza Jane to our Pastor Paul, I was given the small giant, with Andrew whispering, “he’s killing my arm!”  Of course, once I got him he decided to squirm.  I tried to tell him to watch sister, at which point he started to say something like, “down, momma.”  At which point I shoved another Nilla wafer into his mouth and patted it shut.  That didn’t stop him, he spoke with crumbs shooting out at my face.  Good times.  Right about then, Pastor Paul got to the part where he lit the candle and he gracefully whispered over his shoulder in Reynolds’ direction, “Reynolds, look! FIRE!”  It worked!  The kid was mesmerized.  I repeated what Pastor Paul said to keep him intrigued.  Then when the candle was passed off to Uncle DJ, I said, “Look!  DJ has the fire!”  It was amazing.  What could be more exciting to our son than his favorite person holding fire?

Eliza Jane didn’t even whimper…even when she was held up for the congregation to see.  All Lion-King-esque. 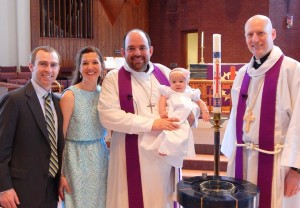 During the ceremony we took a vow as her parents, as a body of believers in Christ, to grow her up in a home, a community where she might know the love and grace of Jesus.   A love that is never-failing and deeper than any love experienced here on earth.  And abundant grace that is greater than all our sin.

Our gospel passage was on John 3:14-21, and while most people learn John 3:16 as a child {go ahead and recite it…}, a lot of folks don’t learn what I think is the second part of that verse, or the next verse, verse 17: For God did not send his Son into the world to condemn the world, but in order that the world might be saved through Him.

A simple message that I pray our daughter learns somewhere along her life’s journey {sooner rather than later, maybe?}. 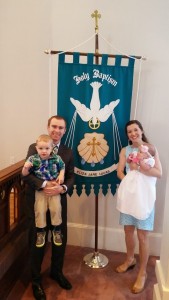