Tonight as I was spending time with Reynolds before I told him goodnight, I asked him what song he wanted to sing.

When Andrew and I found out we were pregnant with baby #2 I knew immediately the name if it was to be a girl: Eliza Jane.  So when we found out she was in fact a “she” we told friends her name.

Many folks asked, “Oh, do you know that song by Vince Gill!?!?”.  Yes.  Yes, we all know that one…as does most of America.  But that one is actually “Liza Jane” and not really the one I want to be serenading my baby with at night…  Have you listened to the words?  Not exactly infant-appropriate…

But then another friend shared with me this sweet folk song by Elizabeth Mitchell {Little Liza Jane} and it quickly became our favorite little signature tune for her.  Yes, I know the name in this one is also Liza Jane…but we change it to Eliza Jane. 😀  {Hey, modify where it counts!}

We sing it and play it often for her and Reynolds can be heard singing it on his own during nap time or while laying down for nighttime.  He’s also been known to belt it out in the car on the way to daycare or some other fun destination.  It is seriously the sweetest thing to hear him singing her song and yes, I have recorded him singing it!

I can remember as a kid my Uncle John singing “my” song to me every time I saw him.  Of all the people that sang it to me, his voice was (is) my favorite.  The song, of course, is by the Beatles: “Michelle”. 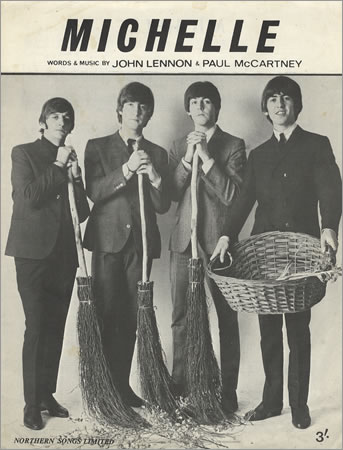 I hope one day Eliza Jane is as much of a fan of her little song as I am of my song.  Oh, I’m sure there will be a time in her life, maybe the “tween” years, where it will annoy the pants off of her and she’ll scream about her ears bleeding from us singing it…  But I know that she’ll come back around and love it and then she will have sweet memories of her big brother and us singing it to her!

Do you have a name-song?  If so, please share!